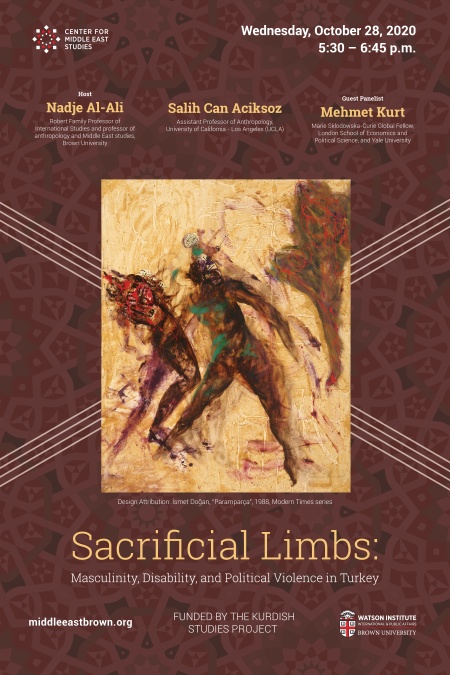 Registration required for the webinar.
Please click on this link to buy the book from the Brown Bookstore. The Bookstore is offering a 10% discount on event books using the code EVENT10.

Kurdish studies have historically been side-lined within Middle East studies or reduced to the study of Kurdish nationalism. While there has been a proliferation of Kurdish studies across the US and Europe in recent years, there has been only limited engagement with Kurdish society in its complexity. The aim of this initiative is to support and contribute to critical and original Kurdish Studies that combine theoretically cutting edge and empirically grounded work as well as highlight creative approaches (films, art, literature) to the study of Kurds and Kurdish societies.

Chronicling the everyday lives and political activism of disabled veterans of Turkey’s counterinsurgency war against Kurdish guerrillas, Sacrificial Limbs: Masculinity, Disability, and Political Violence in Turkey, is an ethnographic study of gender, embodiment, and nationalism in a war-torn nation. Bringing the reader into military hospitals, commemorations, political demonstrations, and veterans’ everyday spaces of care, intimacy, and activism, the book provides a historically grounded analysis of the multiple and sometimes contradictory forces that fashion veterans’ bodies, political subjectivities, and communities. Examining how veterans’ experiences of war and disability are closely linked to class, gender, and ultimately the embrace of ultranationalist right-wing politics, the work contributes to our understanding of the global rise of right-wing nationalisms and militarisms from an anthropological viewpoint.

Hosted by Nadje Al-Ali and sponsored by the Kurdish Studies Initiative.

Salih Can Aciksoz is an assistant professor of anthropology at the University of California, Los Angeles (UCLA). He received his Ph.D. in anthropology from the University of Texas at Austin in 2011. He served as Mellon Postdoctoral Fellow in Asian and Middle Eastern Studies at the College of William and Mary and assistant professor of Middle Eastern and North African studies at the University of Arizona. His first book, Sacrificial Limbs: Masculinity, Disability, and Political Violence in Turkey (University of California Press, 2019), chronicles the everyday lives and political activism of disabled veterans of Turkey’s Kurdish conflict. His work has appeared in journals including the Journal of the Ottoman and Turkish Studies Association, the Journal of Middle East Women’s Studies, Current Anthropology, Medical Anthropology Quarterly, and Culture, Medicine, and Psychiatry. His new book project, provisionally entitled “Humanitarian Borderlands: Medicine, Care, and Terror along Turkey’s Syrian Border,” examines the politics and political economy of humanitarian healthcare.

Guest Panelist:
Mehmet Kurt is a Marie Sklodowska-Curie Global Fellow at the London School of Economics (LSE) and a lecturer at Yale University MacMillan Center for International and Area Studies. His research lies at the intersection of an anthropology of religion, political sociology and ethnography with a specific focus on political Islam and civil society in Kurdish Turkey and among the Turkish diaspora in Europe and the USA. He examines the relationship between state policy and non-state actors to better understand Islamist mobilisation, its political, social, and economic grounds, and its influences on the masses in comparative perspective. He is the author of Kurdish Hizbullah in Turkey: Islamism, Violence, and the State (Pluto 2017).

Host:
Nadje Al-Ali joined Brown as the Robert Family Professor of International Studies and professor of anthropology and Middle East studies in 2018, after leaving a long-term position at the Centre for Gender Studies at the School of Oriental and African Studies (SOAS), University of London. On July 1, 2020, she assumed the role of director of Brown University's Center for Middle East Studies. Her main research interests revolve around feminist activism and gendered mobilization, mainly with reference to Iraq, Egypt, Lebanon, Turkey, and the Kurdish political movement. Her publications include Gender, Governance and Islam (Edinburgh University Press, 2018, co-edited with Deniz Kandiyoti and Kathryn Spellman Poots); What kind of Liberation? Women and the Occupation of Iraq (University of California Press, 2009, co-authored with Nicola Pratt); Women and War in the Middle East: Transnational Perspectives (Zed Books, 2009, co-edited with Nicola Pratt); Iraqi Women: Untold Stories from 1948 to the Present (Zed Books, 2007,); and Secularism, Gender and the State in the Middle East (Cambridge University Press, 2000. Her co-edited book with Deborah al-Najjar, titled We are Iraqis: Aesthetics & Politics in a Time of War (Syracuse University Press), won the 2014 Arab-American book prize award for non-fiction.