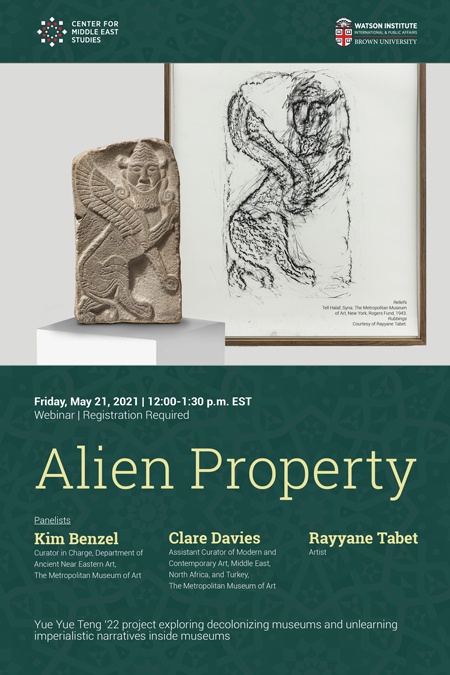 Artist Rayyane Tabet and curators Kim Benzel and Clare Davies will discuss the exhibition Rayyane Tabet/Alien Property, a project that engages with the story of the ninth-century B.C. stone reliefs excavated in the early twentieth century at Tell Halaf, Syria and their subsequent destruction, loss, or dispersal to museum collections around the world. Examining the circuitous journey four of these reliefs took to arrive at The Met under the aegis of the World War II–era Alien Property Custodian Act, the presentation also highlights the very personal connection of the reliefs to contemporary artist Rayyane Tabet.

This event came about as the result of a research project by undergraduate student Yue Yue Teng '22.

Cosponsored by the Watson Institute and the Center for Middle East Studies.

Rayyane Tabet is an artist who lives and works between Beirut and San Francisco. Drawing from experience and self-directed research, Tabet explores stories that offer an alternative understanding of major socio-political events through individual narratives. Informed by his training in architecture and sculpture, his work investigates paradoxes in the built environment and its history by way of installations that reconstitute the perception of physical and temporal distance.

His recent and upcoming solo shows include the Walker Art Center in Minneapolis, the Sharjah Art Foundation, Storefront for Art and Architecture in New York, the Metropolitan Museum of Art in New York, Parasol Unit in London, The Louvre in Paris, Carré d'Art in Nîmes, Kunstverein in Hamburg, and Kunstinstituut Melly  in Rotterdam. His work was featured in the 6th Yokohama Triennial, Manifesta 12, the 21st Biennale of Sydney, the 15th Istanbul Biennial, the 32nd São Paulo Biennial, the 6th Marrakech Biennale, the 10th & 12th Sharjah Biennial, and the 2nd New Museum Triennial. He is the recipient of the emerging artist award at Sharjah Biennial 10 in 2011, the Jury Award of the Future Generation Art Prize in 2012, the ABRAAJ Group Art Prize in 2013, the DAAD Artist in Residence in Berlin Program in 2016 and the Robert Rauschenberg Residency in 2022.

Clare Davies joined The Met in 2015 as the museum's first curator of modern and contemporary art from the Middle East, North Africa and Turkey. She holds a PhD in Art History from the Institute of Fine Arts, New York University where she completed a dissertation on modern Egyptian art in 2014. She organized the first U.S. retrospective of Iranian-American artist Siah Armajani (1939-2020), which opened at the Walker Art Center in 2018 and at The Met in 2019.

Kim Benzel is Curator in Charge of the Department of Ancient Near Eastern Art at The Metropolitan Museum of Art, where she has worked on numerous exhibitions and related publications since starting her career at the Museum in 1990. The most recent project is titled Rayyane Tabet/Alien Property and closes in June 2021. Kim holds a Ph.D. in Art History and Archaeology from Columbia University in New York and previous to that studied at the Kulicke-Stark Academy in New York, where she focused on goldsmithing methods used in antiquity and acquired the technological expertise that now informs so much of her art historical research. For many years Kim participated in archaeological excavations at Early Bronze Age site in Syria until recent situations prevented such work from proceeding, and regularly taught the ancient Near East sections of the Barnard College Introduction to Art History survey course, as well as the ancient Near East portion of the Curatorial Studies course offered by the Institute of Fine Arts at New York University. Currently, Kim and her colleagues in the Department are working on a full reimagining and renovation of the permanent galleries of ancient Near Eastern art at The Met.