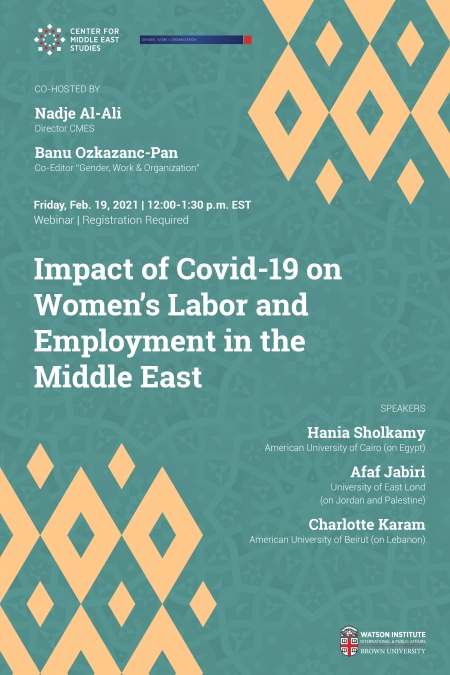 Co-hosted by the Center for Middle East Studies at Brown and the journal Gender, Work & Organization, the webinar will examine the impact of COVID-19 on women’s employment and labor force participation in the Middle East. This conversation is set within a wider background of historic and contemporary neo-liberalization policies within the Middle East, ongoing wars and various regional conflicts, as well as labor and forced migration that have gendered dynamics. We will be exploring the gendered implications of the pandemic in the region and engage in cross-disciplinary conversations around its variant manifestations and experiences across different groups.

Sponsored by the Center for Middle East Studies and the journal Gender, Work & Organization.

Hania Sholkamy, The American University in Cairo (on Egypt), will talk about epidemics, pandemics, and their social and economic determinants and precipitations.

Afaf Jabiri, the University of East London (on Jordan and Palestine), will be speaking to the gendered implications of the pandemic on women’s economic participation, historic and contemporary issues within the Middle East in general terms but with more focus on the case of Palestine and Palestinian refugees in Jordan.

Charlotte Karam, the American University of Beirut (on Lebanon), will discuss the gendered implications of COVID-19 in the context of the Middle East. She focuses on the pandemic as the most recent catastrophic setback to the lives of millions of women in the region who continue to endure multiple layers of hardship due to recent crises. With a focus on Lebanon, she will reflect on the contextual complexities – displacement, mass popular uprisings, state oppression, economic collapse, and the Beirut explosion – within which the pandemic is unfolding, and what this means in terms of increased forms of gender-based violence and inequalities in women’s labor and employment.

Hania Sholkamy is an Egyptian anthropologist (PhD from the London School of Economics and Political Sciences, The University of London). Her work has focused on gender, health and social protection in Egypt. She designed and piloted the cash transfers programs of the government of Egypt in her capacity as special advisor to the minister of social solidarity. She is a proponent of feminist social protection and has lobbied for the right of women to receive welfare and pensions in their own right and not as dependents. She was regional coordinator of the “Pathways to Women’s Empowerment Research Consortium” in partnership with the Institute of Development Studies at Sussex, UK.  She is currently a member of the UNESCO Management of Social Transformations Committee (2019-2022)

She has been a research associate at the International Population Council and was the Ioma Evans Pritchard Junior Research Fellow at St. Anne’s College, Oxford University. She has co-edited two volumes, one titled Categories and Contexts: Anthropological and Historical Studies in Critical Demography (OUP) with S. Szreter and A. Dharmalingam  and another titled Health and Identity in Egypt (AUC Press) with F. Ghannam.

She is currently an associate research professor at the Social Research Centre of the AUC.

Afaf Jabiri is a senior lecturer in the Department of Social Sciences at the University of East London. Her research focuses on gender in the Middle East, gender-based violence, forced migration and diaspora, and Palestinian refugees.  Along with her academic career, Afaf is a feminist activist who has been advocating for gender equality and justice in the Arab region for the last 20 years.

Charlotte Karam is the founding director of the Center of Inclusive Business and Leadership for Women and a tenured Associate Professor at the Olayan School of Business, American University of Beirut. Her work as a scholar-activist contributes to overlapping conversations in HR, business ethics, responsible leadership, public policy, and feminist praxis. Charlotte also serves as the area editor at the Journal of Business Ethics for ‘Feminisms and Business Ethics’, and is a founding member of Khaddit Beirut, an evidence-based, community-led movement of responders working to alleviate the humanitarian disaster caused by the August 4th explosion that hit the Lebanese capital.