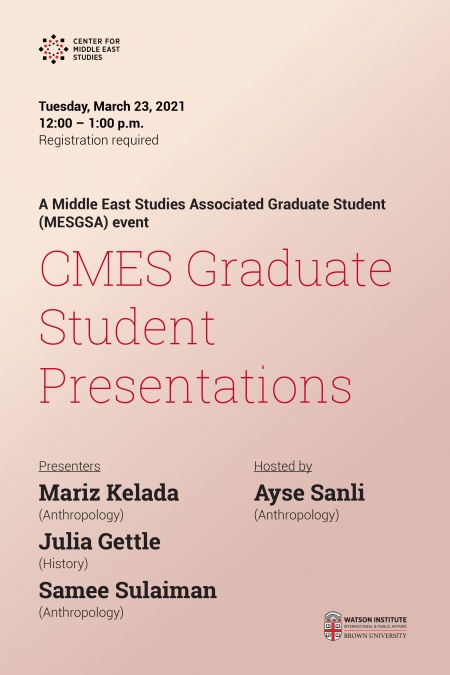 Three members of the Middle East Studies Graduate Student Association (MESGSA), Mariz Kelada, Julia Gettle, and Samee Sulaiman, will present their research to those affiliated with the Center for Middle East Studies. Ayse Sanli will be moderating the event.

Mariz Kelada: My research on and with the workers of the Egyptian media industry re-shifts the theoretical focus from the end products of media to the sociopolitical infrastructural processes involved in their production. The production of subjectivities, be it in relation to Islam, nationalism, or modernity, etc., has been one of the focal concerns of anthropological inquiries on the MENA's cultural production. On the other hand, there is still a significant lack in engaging with the region, especially its cultural production, anthropologically or otherwise via political economy (Abu-Lughod 1989, Deeb and Waniger 2012, Altorki 2015). This indicates the necessity for an analysis attentive to the categories of labor and the economy to highlight cultural production's politics not only on the symbolic and discursive registers but in the actual trenches of everyday laboring lives that produce 'culture.' This, I suggest, poses a possible way out of the foreclosure that I find in theories of resistance, which cast political subjectivity either in association with formal labor and organized social movements, microcosms of quotidian struggles, or the avant-garde artistic ventures.

Julia Gettle: My research on the Arab Nationalists’ Movement (ANM) mobilizes approaches from microhistory and oral history to explore the intersections between regional political transformations and the politics of everyday life in mid-20th century Greater Syria. Founded at the American University of Beirut in 1951, the ANM was intended to form a Pan-Arabist youth vanguard against Zionism, colonialism, and “reactionary” Arab regimes; its splintering in the late 1960s instead birthed the leftist wing of the Palestinian national movement (the PFLP and the DFLP) and the backbone of the broader Arab New Left. My presentation will briefly review how the ANM expanded its social bases through a series of grassroots institutions that transformed the region’s political culture and helped define the meaning of popular Pan-Arabism. I will further highlight how near-universal encounters with the rising Levantine security state shaped activists’ experiences of political organizing.

Samee Sulaiman: My research is on the disability rights movement in Lebanon and how it applies a global disability rights framework in pursuit of its goals in the context of a postcolonial state suffering from a myriad of acute and long term crises. The disability rights movement in Lebanon began with the founding of the Lebanese Sitting Handicapped Union (currently the Lebanese Union for People with Physical Disabilities) in 1981, six years into the Lebanese Civil War (1975-1990). Over the decades LUPD became the largest disability organization run and founded by disabled people in the country as it contended with the various interconnected crises including civil war, sectarian politics, foreign occupation and intervention, reconstruction, invasions, assassinations, and a state incapable of or unwilling to implement and enforce its own laws. In this presentation, I will outline some of the intricacies of how LUPD has contended and continues to deal with these challenges. I will briefly cover some of these historical challenges and then focus on how LUPD’s work has had to adapt since the October 17th uprising of 2019.