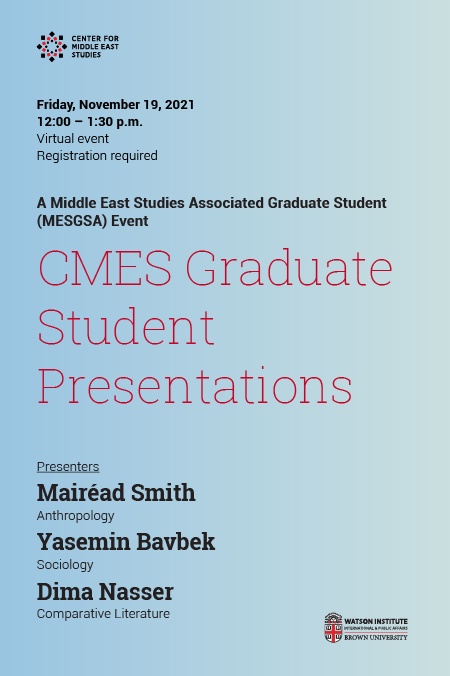 About the Event
Three members of the Middle East Studies Graduate Student Association (MESGSA), Mairéad Smith, Yasmin Bavbek, and Dima Nasser, will present their research to those affiliated with the Center for Middle East Studies.

Mairéad Smith is a second-year PhD student in anthropology and will be presenting MA research on time, gender, and social reproduction in Shingal/Sinjar, Iraq.

Yasemin Bavbek's dissertation focuses on Ottoman-American relations in the late 19th and early 20th centuries as they are constructed around the expansion of American Protestant humanitarian and educational institutions in the Ottoman Empire, specifically through New England missionary organizations. Through discussing the legal mechanisms and contestations around the rights and limits of Americans in the Ottoman Empire, she aims to unpack the relationship between religion and empire in two different imperial formations as well as the imperiality of the relationship between the two entities in the absence of colonial domination or imperial competition.

Dima Nasser is currently looking at the visual poetics of bodies in pain and in degeneration in Lan (لن), a controversial collection of prose-poems from 1960 by the late Lebanese poet Unsi al-Hajj, through and against a series of illustrations from 1967 on a similar theme by the late Palestinian artist Kamal Boullata, in order to complicate a predominant view in modern Arabic criticism of poetry and art being separate enterprises, and advocate instead for a method of "reading relationally," to use a term by Laurie Edson, across literary and cultural production in 1960s Beirut.