The Normalization of Cyprus’ Partition Among Greek Cypriots: Political Economy and Political Culture in a Divided Society 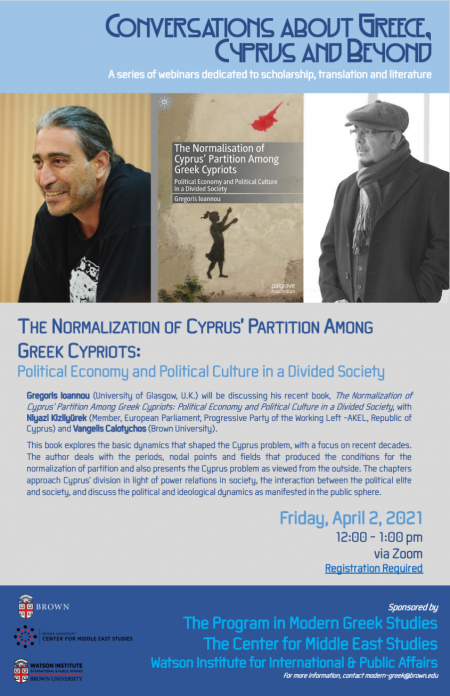 The Normalization of Cyprus’ Partition Among Greek Cypriots: Political Economy and Political Culture in a Divided Society explores the basic dynamics that shaped the Cyprus problem, with a focus on recent decades. The author deals with the periods, nodal points and fields that produced the conditions for the normalisation of partition and also presents the Cyprus problem as viewed from the outside. The chapters approach Cyprus’ division in light of power relations in society, the interaction between the political elite and society, and discuss the political and ideological dynamics as manifested in the public sphere. While analysing primarily the Greek Cypriot community, the book also refers to parallel developments in the Turkish Cypriot and international communities, arguing that the normalisation of Cyprus’ partition is rooted in the political economy and political culture of Greek Cypriots. At the same time, from the perspective of the peace and reunification movement, this is an inherently contradictory and potentially unstable process that can be overturned.

Organized by the Program in Modern Greek Studies, and cosponsored by the Watson Institute and the Center for Middle East Studies.

Gregoris Ioannou is a political sociologist and a Research Fellow at the School of Law, University of Glasgow.  Gregoris has taught at the University of Cyprus and Frederick University. He holds degrees from the London School of Economics (LSE) and the University of Warwick (PhD, 2011). Gregoris’ has published articles in The German Journal of Industrial Relations/Industrielle Beziehungen, Mobilization: an International Quarterly, Capital and Class, and Mediterranean Politics; and chapters in edited collective volumes and as studies commissioned by organisations such as European Trade Union Institute, Friedrich Ebert Stiftung, and Peace Research Institute Oslo. Gregoris is also an external Expert for the European Foundation for the Improvement of Living and Working Conditions (Eurofound) on “Working Conditions and Sustainable Work” and the European Commission on labour market issues. In 2020 he won a prestigious Marie Sklodowska Curie Fellowship, the first award of its kind for the School of Law as well as for the University of Glasgow’s College of Social Sciences.

Gregoris Ioannou’s research work primarily focuses on labour relations and trade unionism, class conflicts and social movements, contentious politics and the South European crisis. His first monograph titled The normalization of Cyprus’ partition among Greek Cypriots: political economy and political culture in a divided society (Palgrave Macmillan, 2020) was originally published in a slightly shorter form in Greek in 2019 with a second edition in 2020 and translated and published also in Turkish in 2020. His co-edited book volume Populism and the Radical Left in Europe was published by Routledge in 2019 while his second monograph titled Employment, Trade Unionism and Class: The Labour Market in Southern Europe since the Crisis is currently in press by Routledge and is expected to be out in June 2021.

Niyazi Kizilyürek is a professor of political history at the University of Cyprus specialising on the political history of Turkey and Cyprus. Born in Potamia, his family fled to Louroujina in the face of intercommunal violence in 1964. His later studies in sociology, politics, and economics at the University of Bremen led to an academic appointment at the University of Cyprus in 1995. Upon his entry, he was targeted by fascists, nationalist politicians and media, facing a year-long campaign for his expulsion from the university. He resisted with the support of his co-workers and the university and remained there. In 2014, he was elected Dean of the School of Humanities.

In 2019, Kızılyürek entered politics as a candidate for 2019 European Parliament elections with the left wing Progressive Party of Working People (AKEL). Though his candidacy proved controversial, he was elected to the European Parliament with 25,051 votes, coming second among AKEL's candidates. His election led to renewed controversy because he said that he will promote the Turkish language as an official language of the European Parliament (because it is an official language of the Republic of Cyprus). A longtime advocate for the peaceful reunification of Cyprus, and a leading public intellectual in Cyprus, Kizilyürek has authored and edited numerous books on the Cyprus dispute, including the Path of A Country in collaboration with the late President Glafkos Klerides and the two-volume A History of Violence and Resentment: The Genesis and Evolution of the Ethnic Conflict in Cyprus

In the early 1990s he produced a documentary called Our Wall with Panikkos Chrysanthou, which later won the Apdi İpekçi Peace Award in 1997. Its first international screening was at the Cyprus & Its People conference, organized by Vangelis Calotychos, at Harvard University in 1994.