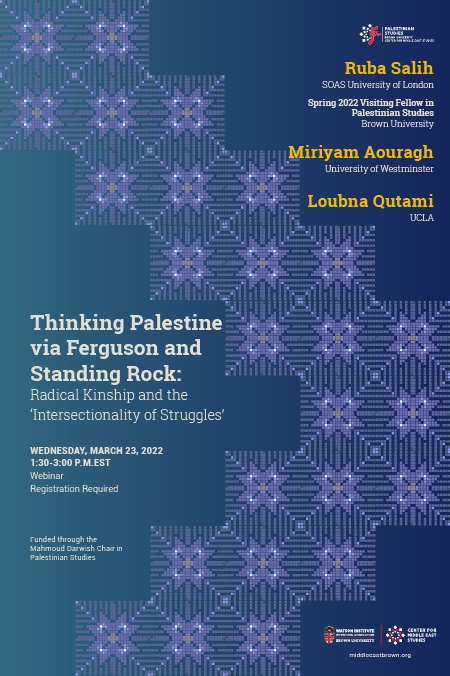 With generous support from the Darwish Chair in Palestinian Studies.

On October 12th 2016, Sky Bird Black Owl gave birth to Mni Wiconi (water is life), at Standing Rock, in the camp erected to protest against the Dakota access pipeline project, considered to violate Indigenous sovereignty and to endanger the region’s water resources. In media portraits Mni Wiconi appears wrapped in traditional Native American patterned cloths, yet also highly visible in the portrait is a Palestinian Kuffyah draped around the cot.

This frame is highly evocative of the central repositioning of Palestine in global justice struggles. Firstly, the black-white checkered Kuffyah acts as a signifier of how Palestine is more than a national liberation project, operating today as ‘analytic’ (Qutami, 2014) of contemporary manifestations of the coloniality of power. Besides continuing to inspire and be inspired by anti-colonial struggles- actualising the legacy of internationalism- Palestine also operates as a lens to detect racialised systems of exploitation, dispossession and surveillance effected today through a global regime. Secondly- and from within a decolonial understanding of power as a system of production of colonial differences- this snapshot is a vivid illustration of temporal epistemologies of resistance that Angela Davis and Cornel West (2016) described in terms of ‘the ‘constant struggle’:  the convergence of movements (anti-colonial, Black, Indigenous and abolitionist movements) and peoples whose grievances are similarly rooted in the structural violence of Western colonial modernity.

This resistant politics- and its attendant languages, aesthetics, and tactics - is generative of what anthropologist Miriyam Aouragh (2019) calls radical kinship, which focuses on a fraternity that is anchored in the collective coalitions of the struggle itself.

In this light, this panel brings together a number of scholars and activists thinking about -and partaking in- radical intersectional struggles and global movements for racial and social justice. We take on Salih and Richter-Devroe’s call to think Palestine as an imaginary of liberation beyond “the not yet fully realized- and yet already mutilated- project of the nation-state” (2018:4) and focus instead on the continuum between settler colonial contexts and liberal democracies.  Featuring visiting scholar Ruba Salih with Miriyam Aouragh and Loubna Qutami this panel contributes to extant and novel forms of radical de-colonial and feminist thinking, underscoring a politics of hope (Carty and Mohanti, 2018) against growing pessimist, nationalist and essentialist takes on identity, oppression, and liberation.