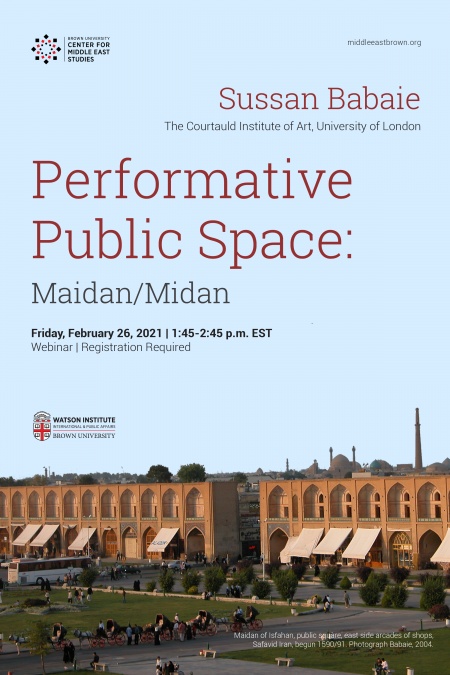 The global media attention to the 2014 Ukrainian Revolution and the 2011 Egyptian uprising in the Arab Revolution, propelled the term Maidan/Midan into contemporary consciousness. In both cases, however, few inquired after the term and its etymology or the spatial/architectural implications in urban development projects that Kyiv and Cairo’s maidan/midan exemplified. In both the media and some scholarly contexts, it was assumed or stated that the notion of public space of encounter, where incitement to action on such political agendas would deploy vast public engagement, were European in origin.

This talk takes the maidan back, so to speak, to where it belongs as a concept, an urban space, and a site of collective action. Maidan in its Iranian context, both etymologically and architecturally, serves as the backdrop to this rethinking of our understanding of the place and space of the Maidan. Using the Maidan in Isfahan as an anchor, and bringing Istanbul and Delhi as comparative checks, Sussan Babaie suggests that the concept of Maidan/Midan in its full range of meanings as a space for action and encounter and for the performance of urbanity, with all its implications including the political, was an early modern phenomenon, and that its most spectacular articulations in architecture were not European but belonged to the great later Muslim empires.

Sussan Babaie is professor of Islamic and Iranian Arts at The Courtauld, University of London. Her research includes topics on architecture, urbanism and urbanity (Isfahan and its Palaces, 2008, paperback 2018; and Persian Kingship and Architecture, 2015); on transcultural conditions of artistic production (The Mercantile Effect: On Art and Exchange in the Islamicate World, 2017; and "Nader Shah, the Delhi Loot, and the 18th-Century Exotics of Empire," 2018); on modern and contemporary arts of Iran and the Middle East (Shirin Neshat, 2013; Geometry and Art in the Modern Middle East, 2019); and most recently on the transmission of sensory experiences between the visual and the gustatory ("Cookery and urbanity in early modern Isfahan," 2018).