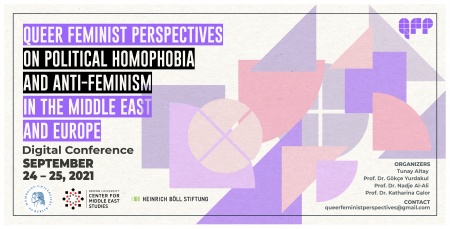 The conference will take place on September 24 – 25, 2021, as a two-day virtual event that aims to bring together researchers, activists, and community organizers to discuss how discourses on gender and sexuality have evolved in the Middle East and Europe amid the rise of far-right and authoritarian movements.

There are three objectives. Firstly to situate far-right and authoritarian actors in their respective socio-historical contexts, and, secondly, to discuss how political homophobia and anti-feminism have developed as core ideological elements of the far right in a local transregional framework. Finally, the conference aims to shed light on local, transregional, and global responses to homophobia and anti-feminism in the respective regions. Queer and feminist paradigms will significantly contribute to our conversation about the far right and social justice.

By adopting this lens, we will bring an intersectional perspective to the study of sex, sexuality, gender, and intimacy: one that builds on the awareness of diverse context boundaries while focusing on the non-normative expressions, practices, identities, and desires at a time of a resurgence of far-right nationalisms.

Keynote Speakers
Deniz Kandiyoti is an emeritus professor in the Department of Development Studies at the School of Oriental and African Studies at the University of London. She is the author of Concubines, Sisters and Citizens: Identities and Social Transformation (1997) and editor of Gender, Governance and Islam (2019) and Fragments of Culture: The Everyday of Modern Turkey (2002).

Phillip Ayoub is an associate professor in the Department of Diplomacy & World Affairs at Occidental College and a fellow at the Centre for International Security at the Hertie School. He is the author of When States Come Out: Europe’s Sexual Minorities and the Politics of Visibility (2016) and editor of LGBT Activism and the Making of Europe: A Rainbow Europe? (2014).

Friday, Sept. 24
The public is invited to register for and attend the following events. These will also be livestreamed:

Saturday, Sept. 25
The following panels are open to the public by registration but will not be livestreamed

The public is invited to register for and attend the following event. This event will also be livestreamed: