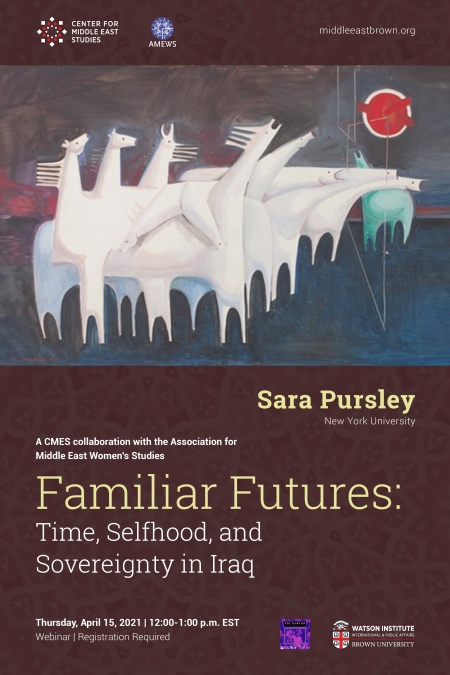 Virtual Event. Register to receive your access link. In collaboration with the Association for Middle East Women's Studies (AMEWS).

Iraq was the first postcolonial state recognized as legally sovereign by the League of Nations amid the twentieth-century wave of decolonization movements. It also emerged as an early laboratory of development projects designed by Iraqi intellectuals, British colonial officials, American modernization theorists, and postwar international agencies. Familiar Futures considers how such projects — from the country's creation under British mandate rule in 1920 through the 1958 revolution to the first Ba'th coup in 1963 — reshaped Iraqi everyday habits, desires, and familial relations. Future-oriented discourses about the importance of sexual difference to Iraq's modernization worked paradoxically, deferring demands for political change in the present and reproducing existing capitalist relations. Ultimately, the book shows how certain goods--most obviously, democratic ideals--were repeatedly sacrificed in the name of the nation's economic development in an ever-receding future.

In collaboration with the Association for Middle East Women's Studies (AMEWS).

Sara Pursley is assistant professor in the departments of Middle Eastern and Islamic Studies and of History at New York University. She is the author of Familiar Futures: Time, Selfhood, and Sovereignty in Iraq (Stanford University Press, 2019) and numerous articles, including “Ali al-Wardi and the Miracles of the Unconscious," Psychoanalysis & History 20/3 (2018): 337-51; "The Stage of Adolescence: Anticolonial Time, Youth Insurgency, and the Marriage Crisis in Hashimite Iraq," History of the Present 3/2 (2013): 160-97; and "'Lines Drawn on an Empty Map': Iraq's Borders and the Legend of the Artificial State," Jadaliyya, 2 June 2015.