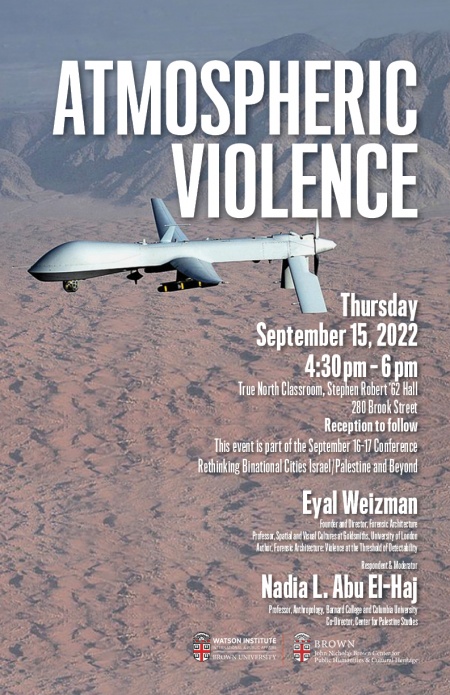 This event is part of the conference: Rethinking Binational Cities: Israel/Palestine and Beyond

Eyal Weizman will speak about cities, warfare, neo-colonization, and apartheid, not by focusing on built structures but on the air that moves through cities.  Airborne toxins, like the colored smoke in a wind tunnel, highlight the dynamics of power and control that we must pay more attention to. Tear gas is deployed to disperse bodies gathering in democratic protest, white phosphorus, and chlorine gas to spread terror in cities, aerial herbicides to destroy arable land and ruin livelihoods, and the smoke rising from large-scale arson to eradicate forests for industrial plantations. Toxic clouds colonize the air we breathe across different scales and durations, from urban squares to continents, unique incidents to epochal latencies.

This violence is not momentary and kinetic like a gunshot or explosion, where ‘every contact leaves a trace. In analyzing airborne violence, causality is hard to demonstrate; the ‘contact’ and the ‘trace’ drift apart, carried away by winds or ocean currents. When clouds shift from the physical to the epistemological, toxic fogs also breeds lethal doubt. When those in power deny the neo-colonial realities, those forced to inhabit the clouds must find new forms of resistance.

These ideas will be developed through the presentation of a number of investigations Forensic Architecture has undertaken in places from Palestine through Chile to Indonesia. Weizman will also discuss the reception this work has had and what he thinks we can learn from the controversies it has generated.

Nadia L. Abu El-Haj, Professor, Barnard College will give a response and moderate.

Co-sponsored by the John Nicholas Brown Center for Public Humanities & Cultural Heritage and the Watson Institute for International and Public Affairs.

Eyal Weizman is the founder and director of Forensic Architecture and professor of Spatial and Visual Cultures at Goldsmiths, University of London, where in 2005 the founded the Centre for Research Architecture. In 2007 he set up, with Sandi Hilal and Alessandro Petti, the architectural collective DAAR in Beit Sahour/Palestine. He is the author of many books, including Hollow Land, The Least of all Possible Evils, Investigative Aesthetics, The Roundabout Revolutions, The Conflict Shoreline, and Forensic Architecture. Eyal held positions in many universities worldwide including Princeton, ETH Zurich, and the Academy of Fine Arts in Vienna. He is a member of the Technology Advisory Board of the International Criminal Court and of the Centre for Investigative Journalism. In 2019 he was elected a life fellow of the British Academy. In 2020 he received an MBE for ‘services to architecture and in 2021 the London Design Award. Forensic Architecture is the recipient of a Peabody Award for interactive media and the European Cultural Foundation Award for Culture.

Nadia Abu El-Haj is Ann Whitney Olin Professor in the Departments of Anthropology at Barnard College and Columbia University, Co-Director of the Center for Palestine Studies, and Chair of the Governing Board of the Society of Fellows/Heyman Center for the Humanities at Columbia University. She also serves as Vice President and Vice Chair of the Board at The Institute for Palestine Studies in Washington DC. The recipient of numerous awards, including from the Social Science Research Council, the Wenner Gren Foundation, the MacArthur Foundation, the Harvard Academy for Area and International Studies, the Institute for Advanced Study at Princeton, and the Harry Frank Guggenheim Foundation, she is the author of numerous journal articles published on topics ranging from the history of archaeology in Palestine to the question of race and genomics today. Abu El-Haj has published two books: Facts on the Ground: Archaeological Practice and Territorial Self-Fashioning in Israeli Society (2001), which won the Albert Hourani Annual Book Award from the Middle East Studies Association in 2002, and The Genealogical Science: The Search for Jewish Origins and the Politics of Epistemology (2012). While Abu El-Haj’s two books to date have focused on historical sciences (archaeology, and genetic history), her third book, forthcoming in 2022 from Verso, examines the field of (military) psychiatry, and explores the complex ethical and political implications of shifting psychiatric and public understandings of the trauma of American soldiers.