Film | The Hour of Liberation Has Arrived: A Film by Heiny Srour 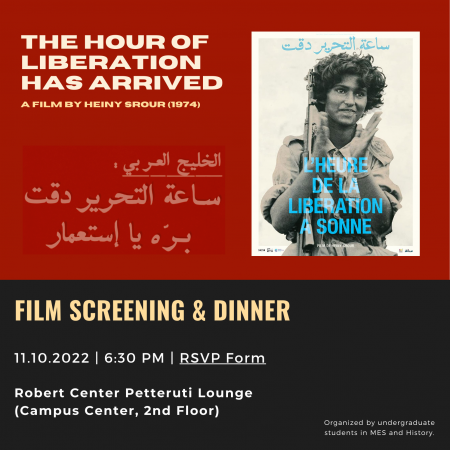 Please RSVP to confirm your attendance.

Please join us for a screening of Lebanese filmmaker Heiny Srour's 1974 film, The Hour of Liberation Has Arrived, on Thursday, November 10th, from 6:30-8:00 p.m. at the Robert Center Petteruti Lounge. Please RSVP to confirm your attendance. We hope you'll join us for dinner and a brief discussion following the screening!

Organized by undergraduate students in MES and History

About the Film
The Hour of Liberation Has Arrived (Sa'at al-Tahrir Daqqat) is the first film by an Arab woman to be selected and screened at the Cannes Film Festival in 1974. The title of the film draws inspiration from the lyrics of a popular song that plays recurrently throughout the film, sung by Dhufari revolutionary fighters, teachers, and students calling for unity in the face of imperial domination. Heiny Srour and her film crew filmed this documentary under bombardment by the British Royal Air Force as they trekked across the highlands of Dhufar, a mountainous region in southern Arabia. From 1964—1976, revolutionary fighters across Oman and the Eastern Arabian Peninsula joined the Dhufar Liberation Front (later the Popular Front for the Liberation of the Occupied Arabian Gulf) to fight against the Anglo-Sultanic regime. The popular movement established social, cultural, economic, and military structures driven by an anti-capitalist, anti-imperialist liberationist ideology. Situated within complex networks of competing global imperial forces and regional national independence movements, the movement in Dhufar is portrayed through the voices and experiences of its own people in Srour's film.

In addition to its radical content, the film was innovative in its introduction of sync sound technology, and it drew upon formal and stylistic elements prominent in other notable pieces of Third Cinema, such as the highly-effective use of captioning from Argentinean filmmakers Solanas and Getino's The Hour of the Furnaces (1968).

Srour's interest in creating this film began during her time as a Ph.D. student in anthropology at the Sorbonne. Of the many leftist Arab figures Srour interviewed, a revolutionary fighter and leader in the Dhufari movement was the only one to speak of a vision of anti-colonial liberation as conditioned upon and deeply entangled with women's liberation. Indeed, the film highlights the strong feminist undercurrents of the Dhufari liberation struggle as part and parcel of the movement's ideology.

As we will see in the opening credits of the film, its production was supported by the efforts and donations of Iraqi, Yemeni, and Palestinian workers and students in Europe, as well as the Yemen-Palestine Committee of Great Britain and the Yemeni Workers' Union in the UK. These individuals and organizations heralded the belief in the Dhufari struggle as one deeply embedded within broader Arab and tricontinentalist revolutionary traditions.