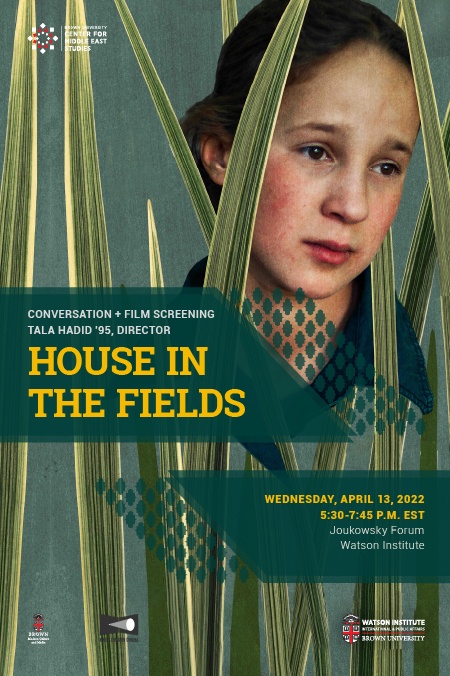 Webcast of Conversation with the Film Director

A loving portrait of an Amazigh community high in the Atlas Mountains in Morocco centering around two sisters. With mixed feelings of hope and trepidation, Fatima is preparing to marry a man she hardly knows and move to Casablanca. She really wants to go to work after she’s married, but doesn’t know if her husband will allow it. In anticipation of the wedding, she is forced to drop out of school. Her younger sister Khadija is a good student and dreams of becoming a lawyer. This ambition seems contrary to the traditional beliefs of the remote mountain village where the two girls grew up. The film switches between beautiful images of nature and everyday life and more intimate footage, including of the sisters waking up and of a conversation between Khadija and a girlfriend about women’s rights in Morocco. House in the Fields is the first part of a planned trilogy, the next part of which will be set in Casablanca.

Tala Hadid, B.A Brown University, MFA Columbia University USA, is a photographer and filmmaker and made her first feature documentary film, Sacred Poet, on Pier Paolo Pasolini. Her films have screened at film festivals around the world, including Berlin and Venice and shown, among other venues, at the MoMA and Lincoln Center in NYC, The Walker Arts Center in Minneapolis, La Cinémathèque Française in Paris, the Smithsonian Museum and the National Museum of Women in the Arts in Washington D.C, the Los Angeles County Museum and the Photographer's Gallery in London. Her films have received numerous awards, including a student Oscar from the Academy of Motion Picture Arts and Sciences. In 2013, the Fine Art photography publisher Stern published a volume of a selection of Hadid's photographs from her project Heterotopia as part of its Stern Fotografie Portfolio series of emerging photographers. In 2014, Hadid completed work on Itarr el Layl. The award-winning film premiered at the Toronto film Festival and went on to screen at numerous film festivals and venues around the world, including the Lincoln Center in New York, the Rome Film Festival, and the London Film Festival. In 2017, Hadid's project, House in the Fields, was an official selection at the Berlin Film Festival where it was nominated for the Glashütte Original Documentary Award. The film was also the recipient, among other prizes, of the Commune di Milano prize for best feature film at the 2017 FCAAL Milano Film Festival, the Prize for Best Documentary film at the Hong Kong International Film Festival, the Fiction/Non Fiction award at Millennium Docs against Gravity in Warsaw, the 2M Grand Prize at Fidadoc 2017, the 2017 John Marshall Award in the US, the Special Jury Prize at the 2018 National Film Festival in Tangiers, and the Grand Prize of the city at the 2018 International Mediterranean Film Festival of Tetouan. In 2019 Hadid participated in the 2019 Rabat Biennale with her installation entitled Floodplain. Hadid's work is also part of the Ruben Bentsov Moving Image Collection at the Walker Museum in the US. She is a member of the Academy of Motion Picture Arts and Sciences.