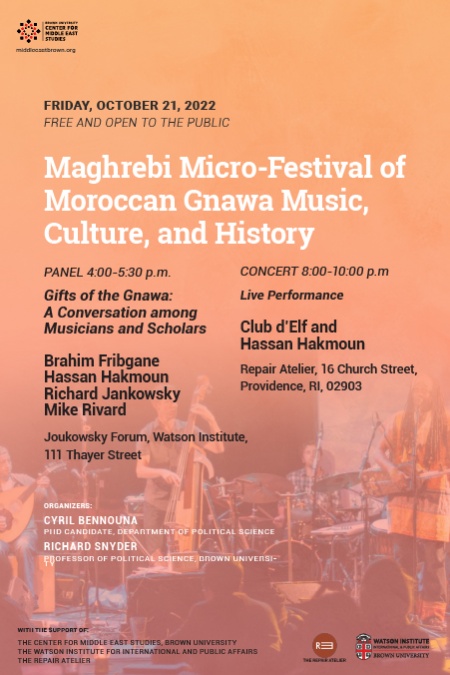 The Maghrebi micro-festival presents performances by world-class talents in the tradition of Gnawa, a musical form and Sufi healing practice that originated among the Moroccan Gnawa, an ethnic group descended from West African slaves. Complementing a live performance by Club d’Elf and Hassan Hakmoun, a panel discussion will cover the history of Gnawa as a people, a music, a religious practice, and a healing tradition. Tufts' University ethnomusicologist Richard Jankowsky, and musicians Hassan Hakmoun, Mike Rivard, and Brahim Fribgane will reflect on the rapid ascent and growing global popularity of Gnawa music in recent years, including its substantial influence on musicians beyond the Gnawa tradition.

Cosponsored by the Watson Institute for International and Public Affairs, Department of Music, and the Repair Atelier

To the naked eye, Club d’Elf looks exactly like a world-class instrumental band: five or six fierce players laying down heavy grooves and exploratory solos on distinctive original material, as audience members dance or listen in rapt attention. To its fans, however, and its large and colorful cast of musicians, D’Elf is all that and much, much more.

The paradox and the power of the unusually named Club d’Elf become increasingly clear through repeated encounters. Unlike almost any other band, D’Elf’s personnel changes radically from show to show. Fans have their favorite configurations and players, but unlike groups where musicians’ tenures are finite, D’Elf-ians revolve in and out, reappearing in endless combinations. Beyond the cavalcade of characters, the music itself is in constant flux. Individual songs can vary dramatically from performance to performance as new alignments of players make every moment fresh. No two sets are alike. Yet the feeling and philosophy that animate D’Elf remain consistent, the product of the vision and dedication of leader Mike Rivard (aka Micro Vard) and the ongoing contributions of his talented collaborators. Devoted fans have been setting their clocks by the group’s bimonthly appearances at their home base, the Lizard Lounge in Cambridge, Massachusetts, for twenty years now, and the message has traveled around the world.