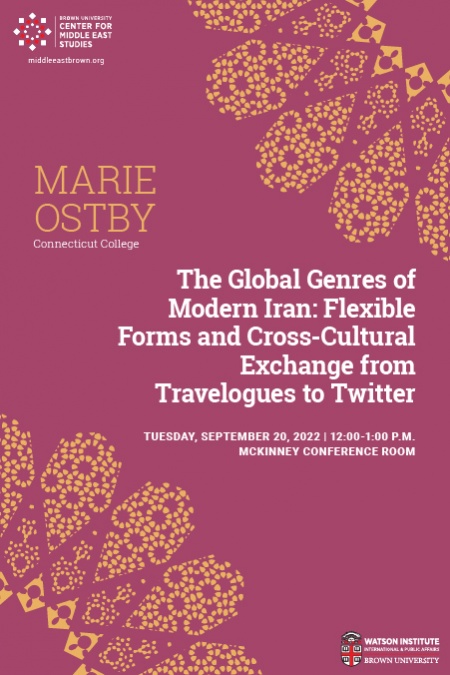 Registration Required - As seating in the McKinney Conference Room is limited, priority will be given to Brown faculty, staff, and students. We will note your response, and you will receive confirmation three days prior to the event.

About the project The Global Genres of Modern Iran: Flexible Forms and Cross-Cultural Exchange from Travelogues to Twitter

Iran’s geopolitical isolation from the West has only grown more entrenched in the past several years, with the canceled nuclear deal unlikely to be revived, Trump’s travel ban and “maximum pressure” sanctions campaign, and Biden's recent overtures to Israel and Saudi Arabia. Despite the impact of this political entrenchment on the creative arts, however, there is a deep and wide network of connections between Persian and Euro-American literary cultures that has only grown richer through the twentieth century and into the twenty-first. From feminist travelogues of the late nineteenth century that hint at anti-imperialism to techno-lyrical modes on social media that resist neocolonial militarism, this network grows through experimentation with genre and creation of new literary forms.

In defying and expanding genre-categorization, modern Iranian writers have not only resisted a global hegemony in which forms are too often seen to move only from a Euro-American “center” to a series of “peripheral” literary communities and markets; they also resist reductive and potentially racist typology and classification altogether. In this talk, Marie Ostby argues that centering modern Iran in repeated acts of genre-creation (rather than categorizing its literature as either traditionalist or “borrowing” from European forms) challenges claims about fixed “centers” and “peripheries” and other conceptions of world literature simultaneously based on publishing economies and genre hegemonies.

Marie Ostby is an assistant professor of English and global Islamic studies at Connecticut College. Her research focuses on modern and contemporary Iranian literature and its global circulation. Her current book project, The Global Genres of Modern Iran: Flexible Forms and Cross-Cultural Exchange from Travelogues to Twitter, uses the interwoven modern histories of Persian and Euro-American literature to explore how transnational literary exchange under politically fraught circumstances is often mirrored in the crossing of genre boundaries.