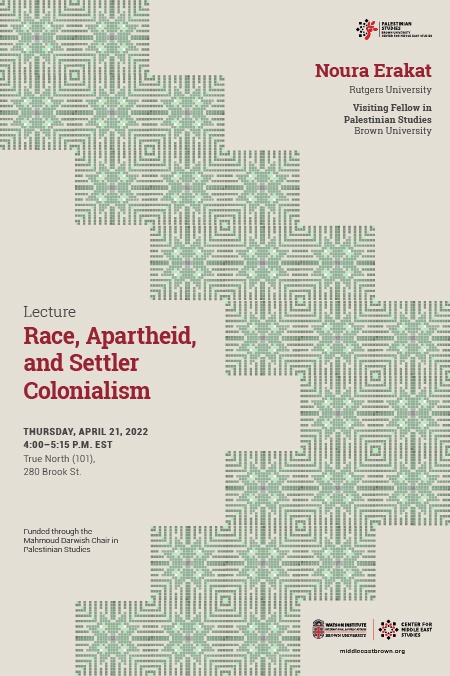 Since 2021, several Israeli and mainstream human rights organizations, have concluded what Palestinians have long known and insisted upon: Israel is an apartheid regime. Despite the welcome, and long-awaited, synergy between them, there remains significant analytical divergence among these organizations and Palestinian activists and scholars. In particular, while the reports emphasize that Israel has become an apartheid regime as a result of its failure to establish a Palestinian state, Palestinians have pointed to Zionist ideology to insist that Israel did not become become a discriminatory regime but is defined by such discrimination. This lecture will explore the implications of this analytical divergence by examining the juridical framework of apartheid embodied in the 1973 Convention consecrating it as a crime against humanity. It will also trace the Palestinian intellectual tradition to highlight that Zionism is not like apartheid but that the ideologies constitute intellectual and political bedfellows. Finally, by visiting the drafting history of UNGA Resolution 3379 (1975) declaring Zionism as a form of racism and racial discrimination, the lecture will help fill a glaring lacuna in the recent apartheid reports regarding racial theories of Zionism.

Palestine
Racialization and Racism in the Middle East and its Diasporas

About the Speaker
Noura Erakat is an associate professor of Africana Studies and in the Program in Criminal Justice at Rutgers University, and non-resident fellow of the Religious Literacy Project at Harvard Divinity School. Her research interests include human rights law, laws of armed conflict, national security law, as well as critical race theory. Noura is the author of Justice for Some: Law and the Question of Palestine (Stanford University Press, 2019), which received the Palestine Book Award and the Bronze Medal for the Independent Publishers Book Award in Current Events/Foreign Affairs. She is co-founding editor of Jadaliyya and editorial board member of the Journal of Palestine Studies. She has served as Legal Counsel for a Congressional Subcommittee in the US House of Representatives, as Legal Advocate for the Badil Resource Center for Palestinian Refugee and Residency Rights, and as national organizer of the US Campaign to End the Israeli Occupation. Her recent scholarship includes, “Geographies of Intimacy: Contemporary Renewals of Black-Palestinian Solidarity” (American Quarterly, 2020) and “The Sovereign Right to Kill: A Critical Appraisal of Israel’s Shoot-To-Kill Policy” (International Criminal Law Review, 2019). Noura has also produced video documentaries, including "Gaza In Context" and "Black Palestinian Solidarity." She has appeared on CBS News, CNN, Fox News, and NPR, among others.