Webinar | Alia Al-Senussi | Gendered Perspectives on Culture?: Creativity, Art, and Culture in the Arab countries of the Gulf. 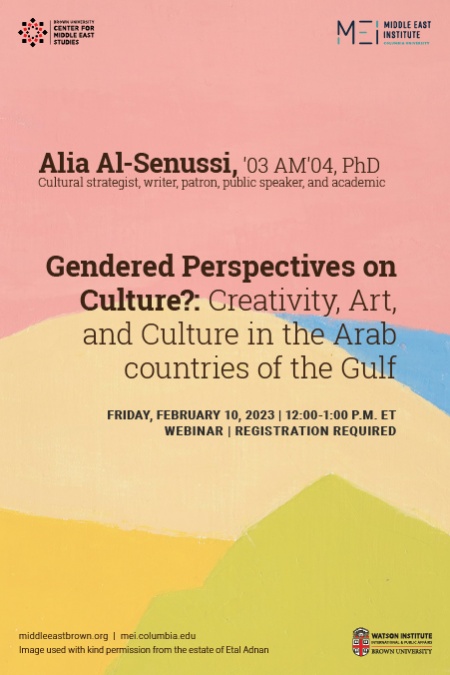 About the Event
Recent spasms of activism (throughout the world) and massive governmental reform has brought great change to the GCC countries in the creative sectors in terms of trying to breach the gap of representation, recognition, and value, as well as in terms of openness, conversations, and communications. How have these changes impacted the cultural ecosystem and specifically the art world? With more diverse voices being heard, do we have different exhibitions and curatorial discourses? Does gender impact the input and the outcome? It is interesting to ask these questions, to pause and ponder the process of the systemic change we are experiencing: where are we on its timeline? What have we learned and what still needs to be done? If there is such a thing as ‘gendered perspective on culture,' how does it function and translate into the everyday art world, within the realm of museums, institutions, curators, and artists?

About the Speaker
Brown alumna, Alia Al-Senussi PhD, is a cultural strategist, writer, patron, public speaker, and academic. As an active member of the contemporary art world, she has for many years been connecting museums, institutions, art professionals, and artists, from the Middle East, the UK, Europe, and Asia with the aim of growing cultural ecosystems. For more than a decade, some of her focus has been dedicated to integrating Saudi Arabia’s cultural sector into the international art world. This has been achieved by bringing many international figures from the art world to Saudi Arabia, thereby establishing ongoing cultural ties, and most recently with the highly celebrated inaugural edition of the Diriyah Contemporary Art Biennale launched in December 2021 which Al-Senussi was integral in creating and producing.