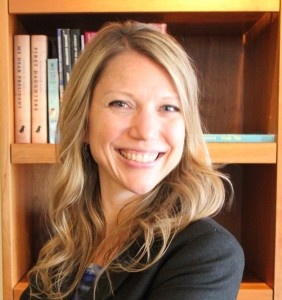 Middle East Studies is pleased to introduce Sarah Tobin, who is starting her position as Associate Director for Middle East Studies on December 1, 2014. She will be teaching MES 1994 on Islamic Economics in the spring 2015 semester.

Dr. Sarah Tobin is an anthropologist with expertise in Islam, economic anthropology, and gender in the Middle East. Her work explores transformations in religious and economic life, identity construction, and personal piety at the intersections with gender, Islamic authority and normative Islam, public ethics, and Islamic authenticity. Ethnographically, her work focuses on Islamic piety in the economy, especially Islamic Banking and Finance, Ramadan, and in contested fields of consumption such as the hijab, and the Arab Spring.

In 2014, Dr. Tobin published “Security and Resilience Among Syrian Refugees in Jordan” in MERIP (http://www.merip.org/mero/mero101414; co-authored with Dr. Denis Sullivan), and “Is it Really Islamic?”: Evaluating the ‘Islamicness’ of Jordan’s Islamic Banks” in Research in Economic Anthropology. She also published “Being Middle Class and Anti-Revolution: The Case of Jordan” in Middle East Policy in March 2012, and “Ramadan Blues” in the Digest of Middle East Studies in 2013. Her current book manuscript, Everyday Piety: Islam and the Economy in Amman, Jordan is under contract at Cornell University Press. Dr. Tobin’s research has been funded by Fulbright, Philanthropic Educational Opportunities (PEO), and the American Center for Oriental Research (ACOR) in Amman, Jordan.