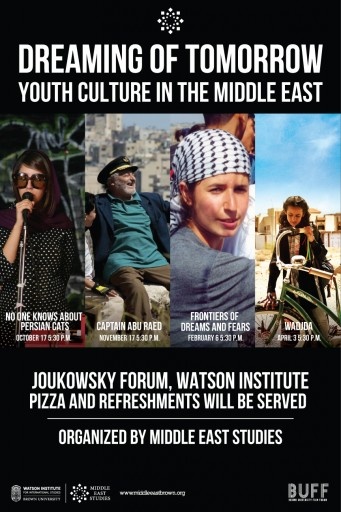 Middle East Studies is pleased to announce its second film series entitled “Dreaming of Tomorrow: Youth Culture in the Middle East”. This year, the series will feature four leading films from Iran, Jordan, Palestine and Lebanon, and Saudi Arabia.

No One Knows About Persian Cats–This film follows young musicians as they attempt to evade Iran’s state-sanctioned cultural repression for a rock band performance in Tehran.

Captain Abu Raed–This is the first feature film produced in Jordan in more than 50 years. It explores the relationship between a charismatic elder in a poor neighborhood of Amman and the children who grow to admire him.

Frontiers of Dreams and Fears–This documentary traces the (pen pal) friendship between two Palestinian refugee girls, one based in Bethlehem, and the other in Beirut. It provides an intimate window into their lives, hardships, and hopes for the future.

Wadjda–This is the first feature film shot entirely in Saudi Arabia and the first Saudi film submitted for an Academy Award. It tells the moving story of Wadjda, an 11-year-old girl on a mission to own a bicycle.