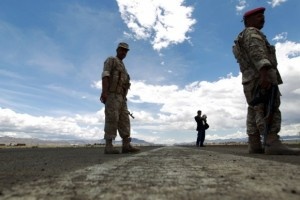 Ruba Aleryani, undergraduate MES and Development Studies concentrator, has published an op-ed in the Middle East Eye. Her piece, “The War in Yemen is Splitting Us,” discusses the escalating conflict in Yemen and outlines why Yemen must be saved. Ruba is an aspiring writer and photographer born and raised in Sana’a, Yemen.

Last week, after finishing my morning lectures, I called my family in Yemen – a daily routine since the escalation of the conflict last month.

“Most of the windows in the house are shattered. But the Saudis have stopped [striking] for now,” my dad said. “Oh, wait, I was wrong. They’re at it again.”

Except, they weren’t. The ‘pounding’ my father was hearing was my nine-year-old brother in the next room beating cushions with his fists as he imitated the sound of airstrikes.

Ever since a Saudi-led coalition launched ‘Operation Decisive Storm’ – a bombing campaign that aims to reinstate President Abd Rabbu Mansour Hadi and push back Houthis rebels – I have been struggling to sleep. Caught between two time zones, the gulf between my life as a university student abroad and that as an activist watching Yemen fall apart, widens every day.