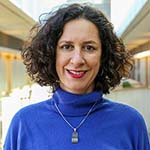 Nadje Al-Ali is Robert Family Professor of International Studies and professor of anthropology and Middle East studies. Previously she was professor of gender studies at the Centre for Gender Studies (CGS), SOAS University of London, where she chaired CGS and headed the Doctoral School at SOAS. Her main research interests revolve around feminist activism; transnational migration and diaspora mobilization; war, conflict and peace; as well as art & cultural studies; mainly with reference to Iraq, Egypt, Turkey and the Kurdish political movement.

Her publications include What kind of Liberation? Women and the Occupation of Iraq (2009, University of California Press, co-authored with Nicola Pratt); Women and War in the Middle East: Transnational Perspectives (Zed Books, 2009, co-edited with Nicola Pratt); Iraqi Women: Untold Stories from 1948 to the Present (2007, Zed Books); New Approaches to Migration (ed., Routledge, 2002, with Khalid Koser); Secularism, Gender and the State in the Middle East (Cambridge University Press 2000) as well as numerous book chapters and journal articles. Her co-edited book with Deborah al-Najjar entitled We are Iraqis: Aesthetics & Politics in a Time of War (Syracuse University Press) won the 2014 Arab-American book prize for non-fiction. Her most recent research and publications focus on the Turkish-Kurdish conflict and the Kurdish women’s movement.

Professor Al-Ali was previously President of the Association of Middle East Women’s Studies (AMEWS) and an elected board member of the Middle East Studies Association (MESA). She has been a long standing member of the Feminist Review collective, and more recently has joined the advisory board of Kohl: a journal of body and gender research. She has been engaged in various forms of feminist activism and solidarity with organizations in the Middle East and transnationally.