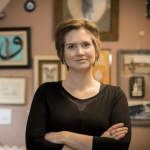 Posthumous Aurality and the Craft of Deathwork

How does sound produce the possibility for a beautiful death? This paper ruminates on questions of deathwork: the intersecting labors of sounding, tactility, performances of piety, and physical care for Muslim deceased. It is based on over eighteen months of ethnographic fieldwork in contemporary Turkish cities, coasts, and seas that began in 2016. My ethnography of deathwork centrally emerges from my diverse experiences as a state-certified gassâle—a woman who cleans, ritually washes (abdest or wudu), recites to, and shrouds deceased Muslim females. I have laid dozens of deceased infants, girls, and women to rest with my body, ears, and voice. This talk interrogates my work with both Sunni and Shia rituals monitored by the Turkish state, as well as my labors in liminal coastal regions to bring refugee deceased out of the seas and conduct the necessary deathwork before their burial in newly-created Turkish cemeteries. Drawing on my broader ethnographic project on critical listening and the craft of Muslim deathwork, this talk explores the ethical and political edges of what I call posthumous aurality—the knowledge that the dead can hear. Rethinking normative anthropological approaches to the thresholds of death and dying, what is at stake in this paper is a new methodology for listening beyond the end of life, and a theorization of how the deceased live on in the sense experiences of deathworkers.

Denise Gill is Assistant Professor of Ethnomusicology and of Islam and the Arts in the Department of Music and in the Abbasi Program in Islamic Studies at Stanford University, where she also is an affiliate in the program of Feminist, Gender, and Sexuality Studies. She is the author of the book Melancholic Modalities: Affect, Islam, and Turkish Classical Musicians (Oxford University Press, 2017). Gill is a two-time Fulbright scholar and was a recent fellow of the American Council of Learned Societies (ACLS). As a kanun (trapezoidal zither) musician and vocalist dedicated to the study of Ottoman-Turkish classical and Mevlevi (Sufi) musics, Gill has performed in concert halls in Turkey, North America, and throughout Europe.