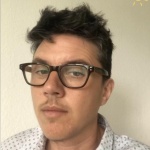 Raphael Khouri is a queer transgender Arab documentary playwright and theatremaker living between Berlin and Egypt. Khouri is the author of several plays, including the first ever trans Arab play, She He Me (Kosmos Theatre, Vienna 2019), which was also recently performed online as part of NYC’s Criminal Queerness Festival. Their other plays include ICH BRAUCHE MEINE RUHE (I need my rest) (Politik im Freien Theater Festival, Munich 2018) and No Matter Where I Go (Beirut 2014). Khouri is also a part of the Climate Change Theater Action; their play Oh, How We Loved Our Tuna! was read internationally as part of the initiative. Khouri was a selected playwright at the Arcola Global Queer Plays (London 2018) and the hotINK at The Lark international play reading series (New York 2015) among many other fellowships and grants.They’ve also been commissioned to write new work for Outburst Queer Arts Festival in Belfast, featuring there in 2019 and 2020. Khouri’s work will also appear in the upcoming International Queer Drama anthology published by Neofelis Verlag in 2020 and the Methuen Anthology of Trans Plays, also out later this year.