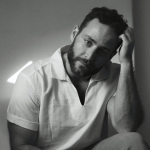 Saleem Haddad was born in Kuwait City to an Iraqi-German mother and a Palestinian-Lebanese father. His first novel, Guapa, published in 2016, is a political and personal coming-of-age story of a young gay man living through the 2011 Arab revolutions. It was awarded a Stonewall Book Award and won the 2017 Polari First Book Prize. Haddad was also selected as one of the top 100 Global Thinkers of 2016 by Foreign Policy Magazine. His directorial debut, Marco, premiered in March 2019 and was nominated for the 2019 Iris Prize for Best British Short.