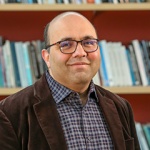 About:
Shahzad Bashir specializes in Islamic Studies with an interest in the intellectual and social histories of the societies of Iran and Central and South Asia circa fourteenth century CE to the present. His published work is concerned with the study of Sufism and Shi’ism, messianic movements originating in Islamic contexts, representation of corporeality in hagiographic texts and Persian miniature paintings, religious developments during the Timurid and Safavid periods, and modern transformations of Islamic societies.

Professor Bashir is currently finishing a book entitled Islamic Pasts and Futures: Conceptual Explorations. This is a wide-ranging treatment that critiques the way Islamic history has been conceptualized in modern scholarship and suggests alternatives, with emphasis on the multiplicity of temporal configurations found in Islamic materials.  This project engages contemporary academic debates regarding language, historiography, and history on the basis of materials of Islamic provenance.

Islam and the Humanities Research Initiative:
Islam and the Humanities is a research initiative housed within Middle East Studies at Brown University. It aims at forging deliberate connections between the study of Islam and Muslims and topics engaged by scholars in the humanities in general. This entails bringing philosophical concerns to bear on materials pertaining to Islam as well as encouraging the discussion of Islamic perspectives in contemporary theorizing in the academy. The initiative is multidisciplinary by definition and open to all regions and time periods relevant to the study of Islam.

The initiative sponsors annual conferences that engage topical issues that are of concern to faculty and students at Brown and beyond. It is connected also to an Open Access book series entitled “Islamic Humanities” published by the University of California Press. In the future, the initiative will sponsor and cosponsor occasional events and workshops (both open and closed to the public). Brown faculty and graduate and undergraduate students are invited to affiliate with the initiative to create a lively community committed to discussion.