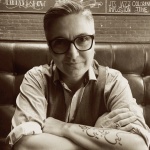 On April 3, 2018, Nasim Najafi Aghdam, an Iranian refugee, vegan activist, artist, and body builder who was upset with YouTube’s demonetization of her videos walked into the company’s headquarters in San Bruno, injuring three people and killing herself with a gun she had purchased in January. Shortly after her death, many internet users speculated that Aghdam was trans, undocumented, and Muslim. By analyzing Aghdam’s YouTube videos and responses to her videos before and after her death, in this paper I argue that neither a perfect victim nor a perfect villain; neither queer because of her sexual identity nor a heteronormative subject; neither a perfect embodiment of fear and hate, nor a figure of love, Aghdam constitutes the “parahuman” in the context of militarized humanitarianism. Positioning her death in relation to the debilitating sanctions on Iran, I argue that Aghdam’s parahumanity is not just owed to crossing lines of human-animal; sane-insane; victim-villain, and robot-human, but to being Iranian—a risky subject who lives a loaned life and does not become an exceptional citizen, notwithstanding the desire for whiteness and assimilation.

Sima Shakhsari is an Assistant Professor in the Department of Gender, Women, and Sexuality Studies at the University of Minnesota. They earned their PhD in Cultural and Social Anthropology at Stanford University and have held postdoctoral positions at the University of Pennsylvania’s Wolf Humanities Center and the Women’s and Gender Studies Department at the University of Houston. Shakhsari was an assistant professor of Gender, Women, and Sexuality Studies at Wellesley College before joining GWSS at UMN in 2016, and has a long history of activism at queer and women’s organizations in the San Francisco Bay Area. Their forthcoming book manuscript titled Politics of Rightful Killing: Civil Society, Gender, and Sexuality in Weblogistan (Duke University Press, fall 2019) provides an analysis of Weblogistan as a site of cybergovernmentality where simultaneously national and neoliberal gendered subjectivities are produced through online and offline heteronormative disciplining and normalizing techniques. Shakhsari’s current research examines the way that Iranian transgender asylum seekers in Turkey and refugees in Canada and the U.S. are nationalized/denationalized, sexed, gendered, and raced in multiple re-reterritorializations as they transition across national boundaries, online and offline “frontiers,” sexual norms, religious discourses, and geopolitical terrains during the “war on terror.”