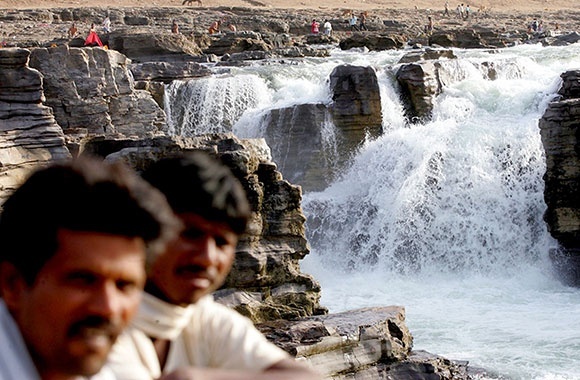 “The common denominator uniting the organizers of the Displacement initiative is a deep concern with the structures and politics of inclusion and exclusion that have shaped the modern world, as well as everyday struggles for dignity, justice, and equality that open up new horizons for a better world.”

New initiative focuses on displacement, past and present

In the early 2000s, while working toward a master’s degree in economics, Vikramaditya Thakur was preparing for a corporate job when a trip to a remote area in rural Maharashtra, a province in Western India, set him on a drastically different path—that of political activist.

In Maharashtra, Thakur served as a volunteer in the highly publicized movement protesting the Sardar Sarovar Project dam on the Narmada river—a project which, when completed, would fully or partially submerge nearly 250 villages. He worked closely with the Bhils, a Scheduled Tribe (an official term in India for groups of historically disadvantaged indigenous people) that the government was forcibly relocating as part of the project.

“I went there for one week, and I am still waiting for that week to be over,” he says. “It has been 15 years.”

Thakur, who stayed in Mahrashtra’s Narmada Valley and its adjoining plains working with the Bhils for two years, went on to become a historical anthropologist, earning his doctorate from Yale in 2014. He continued to study the Bhils, and saw that their story did not end with their relocation.

“The focus is always on the moment of displacement itself and how life was before,” he says. “Usually, the story ends in a tragedy, with the displaced people being displaced forever. The reality I found in the case of my dam and other dams I have studied, and even for civil wars and other types of displacements, is that life continues. People recreate life, sociality, their economic and familial networks: they try to create a new setting.”

Thakur, who is currently developing his dissertation into a book, describes life after forced resettlement not as the end of a hapless people’s way of life but as the beginning of a new one—one that includes, over time, community members engaging with the state and taking an active role in shaping their future.

Most recently a Postdoctoral Fellow at the London School of Economics, Thakur is now a Mellon Sawyer Postdoctoral Research Associate with Middle East Studies at the Watson Institute, overseeing its Displacement and the Making of the Modern World initiative. The project consists of a yearlong series of workshops, monthly seminars, and academic courses, in addition to a website. Thakur himself is teaching a course this semester that looks at five centuries of displacement around the world, including case studies in slavery, war, and industrial projects.

A place to study displacement

Underwritten by a grant from the Mellon Sawyer Foundation, the initiative takes a unique approach to the all-too-topical notion of displacement, exploring it through three different lenses: historical, environmental, and subjective—that is, what is the impact on humans? The program hopes to explore displacement as an engine for the formation of the modern world, taken here as the past 500 years.

Historian Beshara Doumani, director of Middle East Studies, chairs the steering committee that conceptualized the proposal and programming for the initiative and that selected Thakur and two graduate students, Francisco Monar (Department of Modern Culture and Media) and Julia Gettle (Department of History), to handle its operations.

Says Doumani: “The common denominator uniting the organizers of the Displacement initiative is a deep concern with the structures and politics of inclusion and exclusion that have shaped the modern world, as well as everyday struggles for dignity, justice, and equality that open up new horizons for a better world.”

The idea, according to Thakur, is to create a broader framework than the usual linear, Eurocentric one, which assumes that the postcolonial world will follow in the footsteps of the colonial one—that newly independent nation states in Africa, for example, will inevitably have their own industrialization and urbanization that the global North underwent earlier. But this approach elides other kinds of movement, he says, such as the bidirectional flow of things and ideas. In addition, the idea of refugee is identified with the early 20th-century displacement in Europe in the wake of World War II, a view that the initiative considers too narrow.

Colonies often became “laboratories,” he explains. “There was a synthesis of approaches: the existing [indigenous] approaches combined with the colonial officials’ experiments, which were in turn brought back to Europe. So, you had ideas moving back and forth in a two-way process.”

In addition to “Concepts of Displacement,” a one-day symposium held in September, and “Dams and Displacement,” a panel discussion moderated by Thakur in October, the initiative recently hosted a Migration and Displacement seminar, featuring Mehra Family Professor of South Asian Studies Sunil Amrith, from Harvard University. A two-day workshop is also planned for April.

Given environmental disasters and the refugee crises ravaging the globe, a deep, broad, and nuanced understanding of displacement has never been more vital. Thakur hopes that the research on displacement and resettlement will have an impact beyond the academy.

“My work started as grassroots mobilization, but when I moved into academia my job was to study the process. And one of the advantages of documenting processes is the hope that present and future policymakers and present and future activists will learn how resettlement unfolds,” he says. “There’s no going back, and there is always going forward.”

This story was originally published on Watson Explore.