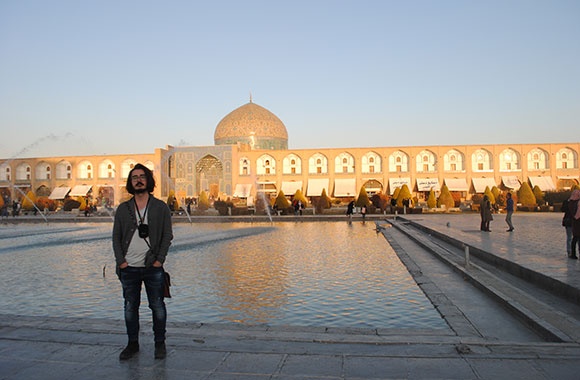 "I am hopeful that this was only a preliminary trip to be followed by many lengthier ones. It is a delightfully safe and welcoming country."

Coming from the former Ottoman capital and with a strong interest in history, literature and politics, I found myself drawn to the Middle East Studies program from early on. I am primarily interested in 20th century Eastern Mediterranean history, from the final dissolution of the Ottoman Empire and the ensuing consolidation and evolution of the Republic of Turkey, to more specifically Greco-Turkish cultural and political encounters throughout this process. I realized early on that attempting to understand these issues required interrelated studies in history, literature, politics and culture-- and our vibrantly interdisciplinary Middle East Studies program was the perfect home for that.

What drew you to the Persian language and to Iran?

I was drawn to Persian because I find Iranian literature and film quite exquisite. As far as Iran goes, when conservative Muslims first came to win a parliamentary majority in Turkey at the beginning of last decade, one question-slogan that one heard over and over was "Is Turkey becoming Iran?" The question was almost laughingly dismissed by many liberals and conservatives alike. While it is unlikely that Turkey will be "guided" by a Shi'a Ayatollah anytime soon, I increasingly believe that the question has a renewed relevance with the rollercoaster that Turkish politics has been on in the past few years. Thus in Iran, I wanted to observe daily life, especially the relationships and communications (or lack thereof) between the state and the people, and see how it can help me think about Turkey. Though I was only there for ten days, and that certainly isn’t enough to understand much about a place or its peoples it was enough for me to see few subtle, and at times rather odd, similarities between Tehran, Istanbul and Athens. I am hopeful that this was only a preliminary trip to be followed by many lengthier ones. It is a delightfully safe and welcoming country.