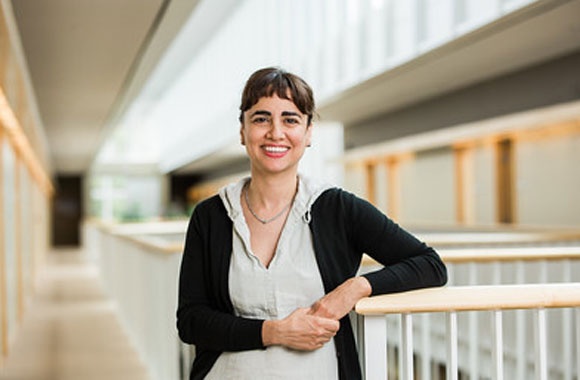 "Since the start of the Arab revolutionary process and the violence that has accompanied it, the culture and arts domain has come to play an ever more crucial role as mobilizer, witness and archivist of historical events."

Assistant Professor Hanan Toukan on the link between visual arts, mobilization, and dissent in the Arab world

Can you tell us what research you're working on these days?

At the moment I am working on two projects. The first is on the visual cultures of Syrian displacement in Germany. Specifically, I am looking at the question of art and cultural institutions’ role in both the representations of refugees’ conditions and the integration of the refugees that have arrived to Berlin in the past two years. The research looks at the process of production of cultural projects including the forms of participation that they entail from civil society actors in the city, as well as the newly arrived refugees. The sites of research are museums, theatres, galleries, activist art spaces, as well as cultural spaces that have emerged spontaneously in some of the refugee camps. What I am interested in uncovering are the boundaries in which the language, ethic and concept of integration in Germany vis-à-vis it’s refugee population functions. What I mean by this is how public discourse has dealt with the age-old issue of the “other” and in particular the “Muslim” other in the field of cultural production.

Secondly, I am in the process of completing my book manuscript based on my PhD. The book, “Starting the Revolution from a Different Place: Art, Dissent and Diplomacy in the Arab World,” is about the relationship between contemporary art, dissent, cultural diplomacy and cultural politics in the Arab Middle East.  It examines the ways in which transnational circuits of visual cultural production are related to how society makes, sees and experiences the political in art and its relevance to the wider publics in Jordan, Lebanon and the Occupied Palestinian Territories.  It takes the phenomena of cultural aid operating within the rubrics of Washington and the EU’s broad democratization programs at the turn of the millennium as the central pivot around which much of the transformations in cultural practices, political identities, agendas and alliances amongst civil society members in the three settings take place. The book is based on ethnographic and archival work intermittently carried out in the cities of Amman, Ramallah and Beirut over a period of 10 years, between 2006 and 2016, and integrates a diverse literature on political and cultural theory, the politics of aesthetics, patterns of globalization and notions of civil society. It is based on 100 interviews and participant research carried out with European and US funding organizations, such as USAID, the Goethe Institute, the Heinrich Boll Foundation and the British Council, as well as local fund recipients in the form of NGOs, gallery owners, activists, public intellectuals, artists, artist collectives and members of the public.  Since the start of the Arab revolutionary process and the violence that has accompanied it, the culture and arts domain has come to play an ever more crucial role as mobilizer, witness and archivist of historical events. As a result the domain has enjoyed an exponential growth in the technical and financial support it receives from US and EU funding bodies. This growth has provoked intense debates within policy circles and a plethora of academic literature on what the role of visual and cultural practices are and should be in violent warfare, political change and the study of politics. The book historicizes and contextualizes this phenomenon as its focus predates 2011 and grapples with it from its first appearance in the 1990s and until its consolidation in the aftermath of 9/11, and after.

Where has your research taken you over the last few years?

For the past few years I have been jumping between Palestine, Jordan and Germany trying to straddle my two ongoing projects! This summer I am planning to travel to those three places once again in addition to Lebanon.

In what ways does your research influence your teaching methods or style?

My teaching content like my research interests is two-tiered but also intricately connected. On the one hand I work on the global movements, conditions, institutions, functions and networks of cultural production in the Arab region and these cultural practices’ relationship to local discourses on notions of aesthetics and politics that are part of the region’s broader intellectual and cultural histories. On the other hand is what I would term the everyday production of visualities and how they intersect and counter power, domination and control in public and private spaces.  The two intersect on many levels. At Brown I have already taught a course on the Visual Politics of the Middle East and another on Cultures, Societies and Practices of resistance in the Arab World. While the former deals with how visuality as a hegemonic order has organized how we see and experience our everyday reality in a global world and in the different historical periods of the region, the latter deals with how different forms of cultural production and political practices from popular protest to armed resistance, to literature to poetry to visual arts and to music have countered the region’s various hierarchies of power, dogged ideologies and prevailing hegemony in ordering identities and experiences.

Hanan Toukan is the Adrienne Minassian Visiting Assistant Professor of History of Art and Architecture and Middle East Studies at Brown University. She is currently teaching MES 0950 Cultures, Societies and Resistance in the Arab World. Her recent publications include:

"Picasso is Mightier than the M16: On Imaging and Imagining Palestine’s Resistance in the Global Community," in Cultural Politics, Volume 13, Issue 1 (2017)

“Whatever Happened to Iltizam? Words in Arab Art after the Cold War,” in Pannewick, Friederike and Georges Khalil (eds.). Commitment and Beyond: Reflections on/of the Political in Arabic Literature since the 1940s. (Wiesbaden: Reichert Verlag, 2015)