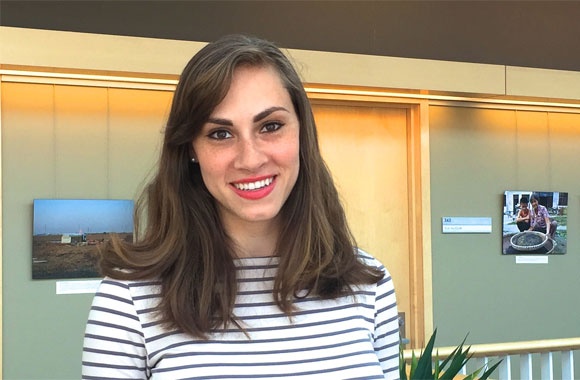 "The Middle East continues to be at the forefront of contemporary political conversations around the world. I am committed to understanding the people of the region beyond the headlines."

Sara Hefny, a doctoral student in anthropology, will travel to Italy to study a humanitarian organization that is helping to facilitate the approval of humanitarian visas to asylum-seekers in refugee camps in Lebanon and resettle them in Italy. Being a Fulbright scholar will provide her with the resources and support needed to conduct the long-term research that is foundational to anthropologists, said Hefny, who was attracted to the Fulbright because of its emphasis on authentic engagement with people from other cultures.

“The mission of international collaboration and partnership is shared by both the Fulbright program and the Brown anthropology department, along with the University more generally,” Hefny said. “The mission of the Fulbright program and its participants is to extrapolate that mode of engagement to a global scale. For this reason, I look forward to being a representative of Brown and the United States and to fostering intellectual exchange between the U.S. and Italy.”

Continue reading below for a profile of Sara.

I am currently a third-year Ph.D. student in the anthropology department at Brown. I conduct research in Italy and Lebanon, where I am looking at a humanitarian corridor that has been created by a group of Italian ecumenical organizations. The initiative selects displaced Syrians who are living in Lebanese refugee camps and are classified as being in particularly vulnerable conditions and facilitates their arrival and resettlement in various cities in Italy. I am particularly interested in the process through which the aid workers evaluate and accept or reject individuals for participation in the humanitarian project and what that process reveals about the ideologies of the organization and its approaches to humanitarianism. After I complete my qualifying exams and advance to candidacy, I will head out to Italy this summer for one year of fieldwork.

I was first drawn to Middle East Studies to find out more about my own heritage - my father is Egyptian and my family and I lived in Alexandria until I was in grade school. Growing up in the United States, where the Middle East was often on the front page of newspapers for uniformly negative reasons, I wanted my own understanding of the history, politics, and social foundations of the region. I did my undergraduate degree in Near Eastern Studies at the University of Washington and wrote my undergraduate thesis while living in Rome in 2011 and 2012 on European asylum regulations in the context of the Arab Spring, so my dissertation project is building on half a decade of work in and study of the Middle East and Europe. My graduate work has been supported by the Center for Middle East Studies at Brown, as well as the Population Studies & Training Center and the Graduate Program in Development at the Watson Institute.

The Middle East continues to be at the forefront of contemporary political conversations around the world. I am committed to understanding the people of the region beyond the headlines. The Middle East deserves an understanding of its complexity beyond the violence and political turmoil that it has become notorious for in Western imaginations. I encourage undergraduates who are interested in pursuing an MES concentration to consider exploring the region outside of these simplistic frameworks and to think about the Middle East with an openness to all of its complexities and paradoxes.