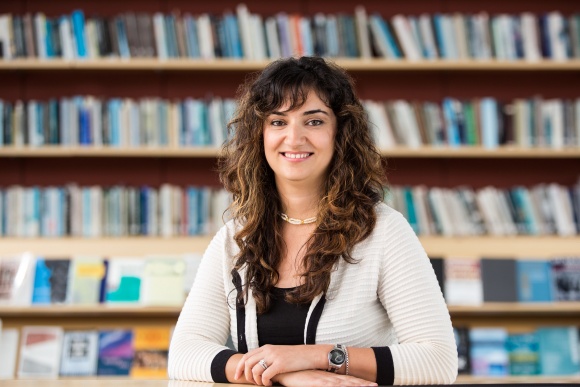 "The more time I spent in one location for prolonged periods of time and began to scratch the surface, the more I realized how much I wanted to do that as a profession. I knew I wanted to spend long periods of time trying to understand a specific question or social phenomena. That’s when I knew I had to go into academia.'"

Tell us a little bit about your academic background. What first drew you to the field of Middle East Studies?

As cliché as it may sound at this point, 9/11 drew me to the field of Middle East Studies. I was a sophomore in college when it happened, and in an attempt to understand what was going on, as well as a desire to push back on what I knew were simplistic and dangerous policy positions that were being implemented at the time, I began to take more courses on the Middle East. Up until that point, I had been focusing much more on Latin American Studies.

I took advantage of study abroad programs at Wellesley College, where I was at the time. I studied in Morocco, studied at the School of Oriental and African Studies (SOAS), University of London, and traveled throughout the Middle East. When I returned for my final year of college, a very good friend of mine, Nikoo Paydar, who I had met at SOAS and who was studying at Tufts, and I started a NGO focused specifically at the Iranian American and Middle Eastern American communities. Through that NGO, IAAB, we began to turn our focus on organizing youth to stand up against the policies being implemented in the U.S. against Middle Eastern and Muslim American communities. I worked on the organization full-time for four years as we got it off the ground.

During that time, I also won a fellowship through Wellesley to create my own study and research opportunity at the University of Tehran. I took three semesters of classes there, all in Persian, and stayed in Iran for a few more years to work and study. I can say without a doubt that these two experiences, IAAB and studying/living in Iran for so long on my own, taught me the most throughout my twenties and made me realize that I wanted to go into academia. Like most undergrads at the time, I figured I’d end up going to law school, but my travels and work abroad made me realize I wanted to do something different. The more time I spent in one location for prolonged periods of time and began to scratch the surface, the more I realized how much I wanted to do that as a profession. I knew I wanted to spend long periods of time trying to understand a specific question or social phenomena. That’s when I knew I had to go into academia. I began my graduate work, first at the University of Chicago, and then for my PhD at New York University’s Anthropology Department.

Can you share with us the research you’re currently working on and perhaps how it has evolved since completing your doctoral studies?

I’m currently working on turning my dissertation into a book. My research for this project focused on pro-regime media makers in Iran. The conversations I’ve had since being at Brown have really helped me reframe and deepen some of the main points of the book, for which I’m grateful and also very excited. It’s always so great to fall in love with your project again, especially when you get tired of thinking and working on it for such a long period of time. My time here has given me that chance to come at the project with new eyes. I’m also working on my second project, which will include both an academic and a transmedia look into chemical weapons usage in the modern Middle East.

Where in the world has your research taken you recently, and what projects were you pursuing as you traveled?

For the past 10 years, I’ve spent most of my time in Iran, as that was the focus of my research. For my upcoming project, I will most likely also travel to Iraqi Kurdistan for fieldwork, and potentially to certain refugee camps that house survivors of chemical bombs from the civil war in Syria.

The best advice I received as an undergraduate was to travel as much as possible. I was lucky because my undergrad institution really gave us a lot of resources and opportunities to travel. I would imagine Brown has similar opportunities for its undergrads. I made it my goal as an undergrad to travel and learn as much as possible and would go to the study abroad offices of Wellesley to ask what scholarships and opportunities were available for grants. Just go in and ask. Be proactive in that respect. In one of those conversations, for example, I found out that there was a little known grant through the Art History Department that offered a $10,000 grant to incorporate art history classes in your travels. So I did that, and it was one of the most memorable experiences. You won’t find another time where you’ll have as much institutional support and as little personal responsibilities as now to do so.

I co-edited a journal issue and published an article in the same issue on new research surrounding the legacies of the Iran-Iraq War. It was just published in Middle East Critique.

For more from Narges Bajoghli, see the following:

Are Iranian Protests a Sign of Reform to Come?

Why are young Iranian couples having trouble getting pregnant?