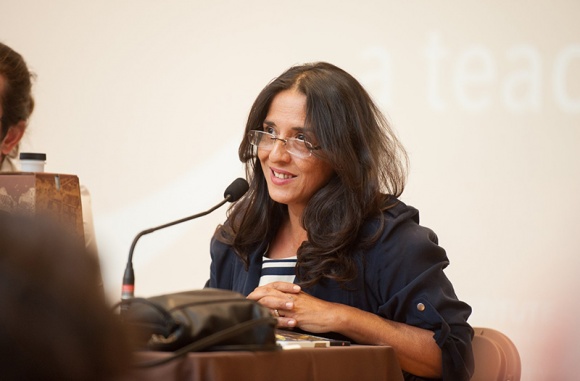 “I had a deep conviction that in order to understand our world, one had to study history but also the history of different worlds and not just that of the West. This questioning in my student years some 30 years ago has not changed. I am still trying to understand the world—from our ‘Middle Eastern’ corner of it through the study of history.”

What drew you to research in the Middle East— Ottoman historiography in particular?

Though a most prestigious institution, my college life back in Turkey at Faculty of Political Science, Ankara University (Mülkiye), was all about questioning social science itself. The very Western orientation of studying international relations there in the mid-1980s was the beginning point of these questions. I became dissatisfied with my education and while most graduates of this college became diplomats, I did not wish to. I had a deep conviction that in order to understand our world, one had to study history but also the history of different worlds and not just that of the West. This questioning in my student years some 30 years ago has not changed. I am still trying to understand the world—from our ‘Middle Eastern’ corner of it through the study of history.

My journey actually began in graduate school studying a different world, that of South Asia. I came to the US in 1988 to study everything that interested me, without any other agenda than simply satisfying my own curiosity. That’s why while studying Middle Eastern history and learning Arabic, I also studied South Asian history and began to learn Hindi. This was the age of critical analysis in South Asian history, just before the emergence of the post-colonial approach. This background not only began to give me historical ways of understanding the worlds we live in, but also ways of questioning how we write history. My doctoral dissertation on Late Ottoman history was also about such an endeavor in a theoretical framework, that of the history of capitalism. For me, political economy and historiography are still integral parts of doing history.

I am currently working on an Ottoman historian of the late 19th century, who produced an impressive literature in novels, journal pieces, political economy and world history volumes. My questions are why and how an Ottoman intellectual would write a world history at a difficult time for the empire, and what that means. I aim to examine Ahmed Midhat’s global history oeuvre to open up binary narratives of modern versus traditional, by and large militating against the conventional examination of ideas in the 19th century global and globally Ottoman contexts. Circumventing these binary-based narratives can dispel the nexus between Islamic and secular teleology that has been informing much of the focus of Middle Eastern historiography. Indeed, the modular forms of secular or Islamic nationalisms have obfuscated much of the intellectual history of the region. My concern here is not yet another attempt at collapsing imperial political thought into the nation, but rather to position Middle Eastern political thought in the 19th century within a global context. These are also the concerns of what I will be teaching next year for MES, a course entitled ‘Middle East as Global History.’

Tell us about your spring 2018 course ‘HIST 1974L A Global History of an Idea: Civilization.’

This semester I am teaching on a related idea: civilization as a global history idea, through the making of global narrations that necessarily entailed a transformative capacity for ideas since at least the 18th century. The analysis of the making of this global idea includes topics like the development of the modern social sciences, the politics of knowledge production, and transnational exchanges of ideas and practices of progress, historicism, nationalism, periodization, and intertextuality.