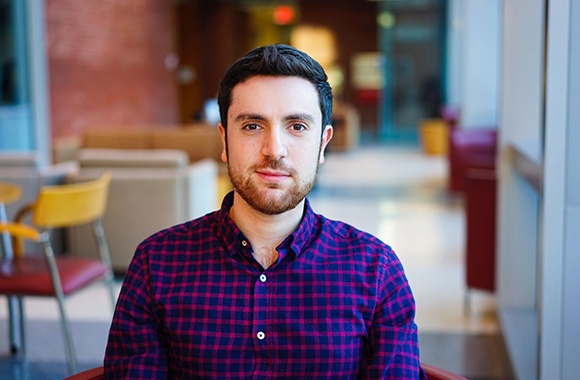 You’ve engaged in a lot of work with refugees – Echo Project outside the Vasilika refugee camp in Greece and as a coordinator for BRYTE (Brown Refugee Youth Tutoring and Engagement Program). What were the motivating factors for your focus on issues centered on refugees and forced migration?
I want to dedicate my life to helping others, with a specific focus on marginalized communities. My family came to the United States fleeing the Lebanese Civil War, so displacement has always been a personal phenomenon for me. As I was studying the politics and history of the Middle East, refugee and migrant communities repeatedly came up as suffering some of the most structural oppression and disadvantages in the region. I took Professor Sarah Tobin’s Displacement and Refugees in the Middle East class, and studied the history and contemporary politics of forced displacement and migration. Beyond the classroom, I wanted to ground that knowledge in real experiences by listening to communities themselves and learning from them in a way that added texture to my academic background. That’s why I took a semester off from Brown and worked in Greece and conducted research on the refugee crisis at the Lebanese Center for Policy Studies in Beirut. The latter was a different kind of on-the-ground experience in which I worked with Lebanese politicians, policymakers, and UNHCR [United Nations High Commissioner for Refugees] officials and watched them in real time work to address the Syrian refugee crisis in Lebanon.

How have your studies at Brown informed your postgraduate plans?
What I value most about my undergraduate education is that I have learned how to read, write, and think critically about the world and how it operates. I think many people conceive of college as a place to learn “practical” skills for a professional career (which I have done), but what has been truly priceless, was learning and developing a worldview informed by history that understands how power and structural oppression work—whether it is structural racism in the US or imperialism and colonialism in the Middle East. At Brown, and in Middle East studies, I have developed a worldview that has grounded my desire to fight injustice with my career and dedicate my life to serving others.