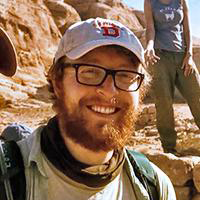 With the generous support of the Middle East Studies Research Travel Award, this summer I traveled to Petra, Jordan and participated in the second season of the Brown University Petra Terraces Archaeological Project. In support of my dissertation research, I led excavations of three units seeking to clarify the chronology, duration, and function of agricultural terraces within the hinterland of ancient Petra. This research will lead to a better understanding of how agricultural infrastructure constructed during the Nabataean and Roman periods (1st century BCE – 4th century CE) persisted, was adapted, or was abandoned during later periods as population declined and settlement dispersed away from the city center. Our results from this season show that not all agricultural terraces were constructed during the Nabataean and Roman periods, with some likely built in the Islamic period as local populations responded to environmental and sociopolitical changes. Such findings nuance the interpretation of agricultural intensification as being primarily the result of high population pressure and centralized political control. That pre-existing agricultural infrastructure can persist and be adapted in later periods, and in fact encourage the construction of new terraces, demonstrates the need for a multitemporal perspective on these agricultural systems and a greater awareness of the diversity of functions they can serve.