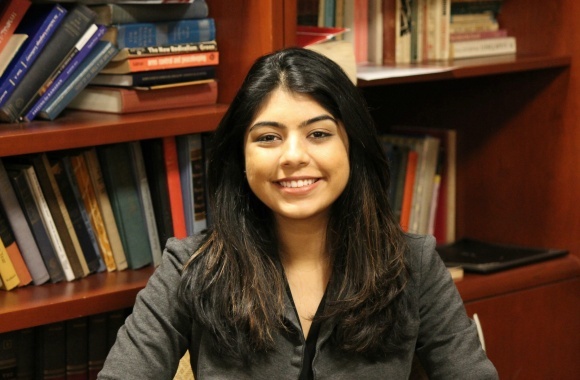 Why did you decide to concentrate in Middle East studies?
I came to Brown thinking I’d be an international relations major with a focus on the Middle East because of the interest I had developed in the politics of the region during the nine years I lived in Dubai. My first year of college, I took Arabic with Professor Miled Faiza. Previous MES DUG leader, Anna Murphy, was in my class and invited me to the MES DUG events. She really made an effort to make me a part of the community and pushed me to double-concentrate in MES and IR. The next year, I made the decision to declare MES not only because the flexibility of the concentration allowed me to pursue my interests in cognitive neuroscience, computer science, and psychology, but also because the MES community had quickly become one of my favorite communities to be a part of at Brown.

Tell us about your current study abroad experience in Jordan.
I spent this semester [spring 2019] studying refugee health and humanitarian action in Jordan. I have been interested in the ways in which humanitarian intervention is carried out in the Middle East since I became involved with Professor Dima Amso’s Virtual Lab project my first year at Brown—a project which aims to bring cognitive neuroscientific principles of trauma and development to NGOs creating psychosocial support interventions for Syrian refugees.

The program I had the chance to be part of is comprised of a number of in-depth lectures given by leaders of both international and local NGOs in Jordan and Geneva. It has allowed me to gain a much broader understanding of the flaws in the humanitarian system, especially as it applies to refugees, and the barriers to overcoming these flaws. There is a common misconception that humanitarian aid is somehow apolitical because it aims to do good, but humanitarian action is just as political as any other form of international governance or decision-making. Meeting with individuals from a number of major NGOs responding to the refugee crisis has helped me get a better sense of what the major political considerations governing the sector are and how they can be either overcome or instrumentalized to lead to better outcomes for beneficiaries of aid—both on an individual and on an institutional level.

While here in Jordan, I am also working on a research project focused on the role of refugee activism in the creation of the wastewater networks in Zaatari Camp, the biggest Syrian refugee camp in the country. The project seeks to reconcile the conflicting narratives provided by the NGO community and the residents of Zaatari in regards to the creation of the wastewater system, which was the first of its kind in a refugee camp.

What are your postgraduate plans?
After working for a couple of years, I’m hoping to pursue an MBA and a Masters in Social Work before entering the international public sector to hopefully address some of the major obstacles to effective and respectful humanitarian action. That being said, with the ever-changing political and social realities of the world we’re living in and its many crises, I’m sure my plans will change as I seek to make a positive impact of some kind.