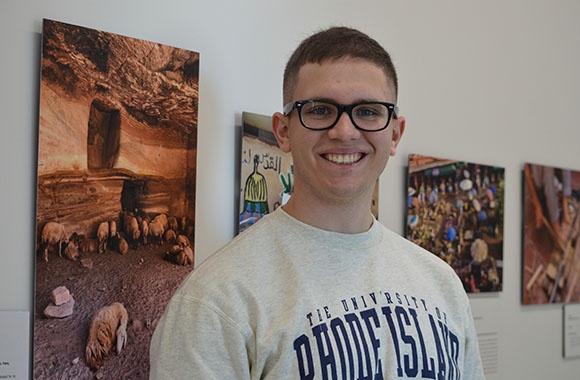 Why did you decide to concentrate in Middle East studies?
As the son of an Afghanistan and Iraq war veteran and a future Naval Officer, I felt it was important to develop a better understanding of the relationship between the Middle East and the United States. I wanted to gain a perspective on the diverse groups and cultures that call the region home, and to learn more about how the United States has impacted life for people in the Middle East. Many Americans and people working in national security talk about the region in macro-level stereotypes, and I think that an important part of redefining the lens through which Americans engage with the Middle East is learning about the history, cultures, people, and current affairs of the region.

You traveled to Oman on a Project Global Officer Scholarship to study Arabic. What was that experience like?
I went to Nizwa, Oman on a Project Global Officer Scholarship to study Arabic in the summer of 2018. I loved the study abroad, and was fascinated to learn about Oman and how Omanis, Yemenis, and folks working in Oman from elsewhere in the world thought about the United States and its role in the Middle East today. I also got to see many of the diverse landscapes and cultural institutions in Oman while studying Arabic with the help of the staff at the University of Nizwa. Oman doesn't seem to get a lot of press coverage in the U.S., which is a shame because it is an awesome country.

What advice would you give underclassmen?
Try to study abroad if you can. Getting to interact with people who speak the language you study at Brown is one of the most rewarding experiences I've had. You'll also make some great friends along the way and meeting people from elsewhere in the world is as important to informing your worldview as any class you'll take at Brown. When I was in Oman, we had a teacher from the university drive us around downtown Nizwa offering to buy us Mountain Dew as our welcome to the country, and on the 4th of July, the staff went out to the only burger place in town to get us burgers to make us feel less homesick. I still talk to some of the folks from Oman, and regardless of how the conversations you have go, you can learn a lot about the things you have in common with people no matter where you live.

What are your postgraduate plans?
I'll commission as a Surface Warfare Officer in the U.S. Navy in May, and I hope to get stationed on a Guided Missile Destroyer in Pearl Harbor, Hawaii after completing the Basic Division Officer course.