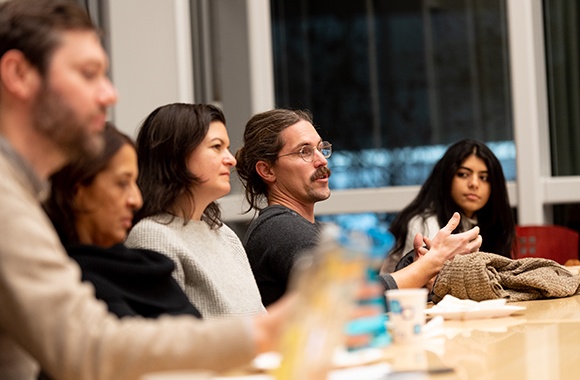 How and why did you become interested in Palestinian Studies?

I lived in the Middle East for a number of years before graduate school, mostly in Palestine. During that time I worked with an organization in Ramallah and learned a lot about the anti-colonial struggle in the West Bank, and how immediate concerns over land were inseparable from a host of governmental interventions, legal regimes, and corporate interests that connected Palestine to places and movements across the globe. My time there coincided with another go at neoliberal state building for the Palestinian Authority, which was supposed to create the grounds for economic cooperation with Israel and ultimately some kind of regional free market peace. When I returned to the United States to study anthropology, my hope was to make sense of how Palestine could be both a site of radical social projects and politics as well as a seemingly promising frontier for market expansion and capitalist development.

I’m currently working on a book about Palestinian land defense and the ways that private ownership becomes a central problem for attempts to hold collective territory. The reason for this in part stems from the legal and economic history of Palestine, and in part from the ways that the Israeli state requires that Palestinians prove private ownership in order to prevent the confiscation of their land. The various land defense projects that I cover range from attempts to shore up Palestinian peasant agriculture, to preventing fraudulent land acquisitions by Israeli companies, to Palestinian attempts to title land and encourage investment in property markets. All of them illuminate different ways that law and capital shape approaches that, while all drawing on a shared repertoire of land defense practices, lay the groundwork for very different kinds of futures.

This year, I’ve drafted several articles from this material to explore some ideas that I won’t have space for in the book. The first tells the story of Palestinian surveyors who draw on older property Ottoman documents in land disputes between Palestinian owners and the Israeli state and the work they do to make these documents legible to Israeli courts. The second looks at how the possibility of land sales to Israeli buyers poses a series of problems for Palestinian Authority land titling, and what these challenges can tell us about the reconfiguration of property, market, and territory when liberation has receded, if not disappeared, from the collective political horizon.

Thinking about labor and class in the Middle East is a helpful way of both examining the specificity of the region while seeing it as inseparable from the trajectory of global capital since the 1970s. Throughout the semester, we looked at class formation in different locations and industries in relation to technological development, agrarian change, debt, and increasing precarity that has transformed who works, where they work, and the sorts of politics that work (or its absence) gives rise to. The main point of the course, though, was really to understand the complicated relationship between processes that we would mark as “global” and the local and regional dynamics of class formation. What we found was that responses to instability and crisis draw on particular combinations of ideology, aspiration, organization, and tactics that, while responding to similar pressures, give rise to different formations of class politics. Understanding these variations has important implications for the study of the region, the elaboration of theory, and the possibility of solidarity.