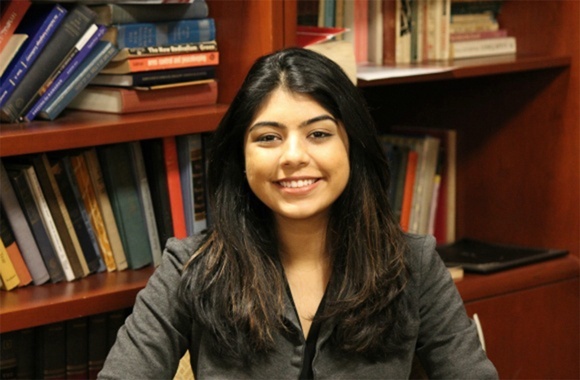 You recently submitted your thesis, titled “Homemaking in Emergencies: Resident-Led Infrastructural Development in Za'atari Refugee Camp.” Could you describe your research?

My thesis was focused on the changes to public health infrastructure that happened in Za’atari Refugee Camp in Jordan, which is the biggest Syrian refugee camp in the Middle East. In the spring of my junior year, I studied abroad in Jordan. While there, I had thought that I would study refugee protest in the camp, which I had read brief mentions of in different newspapers. However, when I got there, I realized that not necessarily the most salient concern of people on the ground and that it would be more effective to focus on the root causes of some of their concerns. I started talking to a lot of women at the NGO I was working at and they spoke about the way that wastewater in the camp was handled. It initially seemed kind of mundane at the time, until I started asking more questions and found out what a serious problem it had been for many of them, from both a sanitation and a Gender Based Violence perspective. Obviously, talking about public health and sanitation infrastructure now has a completely different tone in the context of COVID-19.

My thesis ended up focusing on this $51 million wastewater network project that was a really unique cooperation between different UN development theories and programs and the UNHCR, which generally only does emergency infrastructure. The project was the first of its kind in a refugee camp and what’s key to its story is that it didn’t actually come from the international community; really, the people who came up with the idea for the project were the refugees on the ground. So, not only is it like the first system of its kind, but it ends up being a really good example of ways in which actions taken by residents of these camps can be formalized into larger systems.

We tend to think of refugees as passive recipients of aid and I knew that I wanted to reframe that dynamic in a way that gave the people back their agency. There are some interesting studies about how after World War II, the way that the individual refugee was framed was as a political dissident against the Axis Powers. Then as the refugee problem evolved and became a problem primarily situated in the Global South, that image became one of these huddled masses of people. The work that the refugees did in the camp to build this infrastructure is never really explained as such in public documents published by the U.N. or in Jordanian newspapers, and I wanted to focus on that agency; to talk about something that no one talks about.

How did it feel to finish and submit your thesis now, with Brown’s campus closed due to the COVID-19 pandemic?

Studying public health infrastructure during this time has been really interesting. It feels really pressing and while it was more difficult than I think it would have been otherwise, I've had really wonderful advisors who have kept me on track. I think more than anything, just knowing how pressing the issue of sanitation has become has made the project feel particularly important right now regardless of the fact that the usual thesis presentations and submission processes aren’t going on.

You concentrated in both Middle East Studies and Behavioral Studies. How did those two areas of focus complement each other?

Under BDS I studied public sector decision making, which allowed me an insight into the ways in which these big political actors actually work on the ground. If you take into account economic theories and theories of technology--the ways in which all these different things are really integral to the work it's not just a diplomacy problem anymore. There are just too many factors. And I think being at Brown allows you to look at things from a number of different lenses, which is really great. My BDS capstone used natural language processing algorithms to figure out which social factors surrounding humanitarians from my interviews indicated that they would use more positively or negatively valenced language when talking about camp residents--looking at all these different psychological and environmental factors that could lead to how someone treats a beneficiary of their work. Obviously quantitative studies that use NLP like this have to be taken with a grain of salt but the project was part of my trying to understand some of the really stunning responses I had gotten from humanitarians on the ground through a different lens.

Eventually, I hope to be a practitioner in development or in humanitarian aid. I think there are a lot of things that you have to think about on the ground and a lot of skills that can be really really useful in that context, such as economics, computer science, or psychology. My behavioral science concentration has given me a lot of insight into a lot of ways that the system can be made better, and I think it has given me a lot of the tools I need in order to work toward that goal.

Over the course of your four years at Brown, how have your plans for the future evolved?

I don't even remember what I wanted to do when I was a first year, but I think I have always wanted to go into UN work or NGO work or development work. That said, I’ve also spent the last four years critiquing all of those institutions pretty heavily through an academic lens. Now, I'm back at a point where, while I know that there is a lot of work to be done, I also think many people from within these bodies recognize that they need to improve, and there are so many resources given to these organizations that even marginal institutional changes can have a tangible impact. In essence I think there’s still good to be done there and I hope to work in the field after I get my Masters.