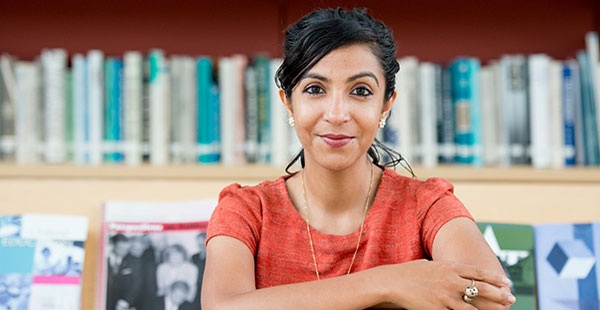 Prerna Singh is Mahatma Gandhi Associate Professor of Political Science and International Studies at Brown University. She holds appointments across Political Science and the Watson Institute for International and Public Affairs, and is also affiliated with the Departments of Sociology and the Center for Contemporary South Asia. Singh is a fellow of the Canadian Institute of Advanced Research (CIFAR) and co-convenor of the Brown-Harvard-MIT Joint Seminar in South Asian Politics.

Singh completed her PhD and MA from the Department of Politics at Princeton University, the tripos in Social and Political Studies from Cambridge University, UK, and a BA (Honors) in Economics from St Stephen’s College at Delhi University. Prior to joining Brown she was at the Department of Government at Harvard University. Singh is a recipient of the so-called ’brainy award’ from the Andrew Carnegie foundation, the Berlin prize from the American Academy of Berlin, the Stanley and Priscilla Kochanek prize from the American Institute of Indian Studies, the Charlotte Elizabeth Procter honorific fellowship from Princeton University, as well as fellowships from the Harvard Academy for International and Area Studies and the Center for Advanced Study for India (CASI) at the University of Pennsylvania.

Singh has delivered over a hundred talks on her research in a range of scholarly, policy and popular venues across the US, Canada, China, Denmark, Finland, France, Germany, Hungary, Italy, India, Norway, Singapore, Spain, Sweden, Switzerland, India, Italy, and the United Kingdom. She has been invited to be the keynote speaker at the annual meeting of the Nordic Sociological Association, the Zentrum für interdisziplinäre Forschung (ZIF), Germany; the Institute for Advanced Study in Toulouse (IAST); the World Bank’s Human Development Forum; and the Global Development Institute, University of Manchester. Singh delivered the 2018 commencement address at the Lincoln School, an independent all-girls college-preparatory school in Providence, RI.

Singh’s research focuses on the improvement of human well-being, particularly as it relates to the promotion of social welfare on the one hand, and to the mitigation of ethnic conflict and competition, on the other. Her work combines multiple methods including comparative historical, ethnographic, statistical, survey and experimental analyses. Singh’s research has won numerous prizes across the disciplines of Political Science and Sociology. Her book, How Solidarity Works for Welfare: Subnationalism and Social Development in India (Cambridge University Press 2016), was awarded both the American Political Science Association’s  Woodrow Wilson prize for the best book published in politics and international relations, as well as the American Sociological Association’s Barrington Moore prize for the best book published in comparative historical sociology.

Singh has co-edited the Handbook of Indian Politics (Routledge 2013), and is the author of numerous chapters in edited volumes as well as several prize-winning journal articles including in American Behavioral Scientist, Comparative Political Studies, Comparative Politics, World Development, World Politics, and Studies in Comparative International Development. Singh is presently working on a number of different book projects. In her book manuscript, Embedded Interventions: Ideas, Institutions and the Control of Contagion in China and India , Singh compares state-society relations in China and India through the lens of public health, focusing in particular on the control of infectious diseases via the uptake of technologies such as vaccines through the nineteenth and twentieth centuries. In The Case for Nationalism, she proposes a two dimensional understanding of nationalism towards showcasing the constructive potential of nationalism, especially as it can promote 'development as freedom' in the sense  proposed by Amartya Sen, as the advancing of  political, social and economic freedoms. In Progress and the People: Nehru’s India and Mao’s China Singh analyzes how differences in the place of the ‘people’ in the visions of development articulated by, influenced the distinct trajectories of 'progress' pursued by the newly sovereign states of India and China under Nehru and Mao respectively in the 1950s and 1960s.

Woodrow Wilson prize for the best book published in politics and international relations in the last year by the American Political Science Association, Winner.

Barrington Moore prize for the best book published in comparative historical sociology in the last year by the American Sociological Association, Winner.

Luebbert prize for the best article published in Comparative Politics in the last two years by the American Political Science Association, Winner.

Mary Parker Follett prize for the best article published in Politics and History in the last year by the American Political Science Association, Winner.

Outstanding faculty article in the Sociology of Development in the last year by the American Sociological Association, Winner.

‘The Ties that Bind: National Identity Salience and Pro-Social Behavior towards the Ethnic ‘other’’. Comparative Political Studies. March 2015 48: 267-300. Co-authored with Volha Charnysh and Christopher Lucas.

How Solidarity Works for Welfare: Subnationalism and Social Development in India Book-Related Press

In the End is the Beginning - Indian Express

The Upside of Nationalism: Politics for the Common Good in India - Weatherhead Center

Ten interesting things that we read this week - Forbes India

The Academies of Arts, Humanities and Sciences, Canada

The London School of Economics and Political Science