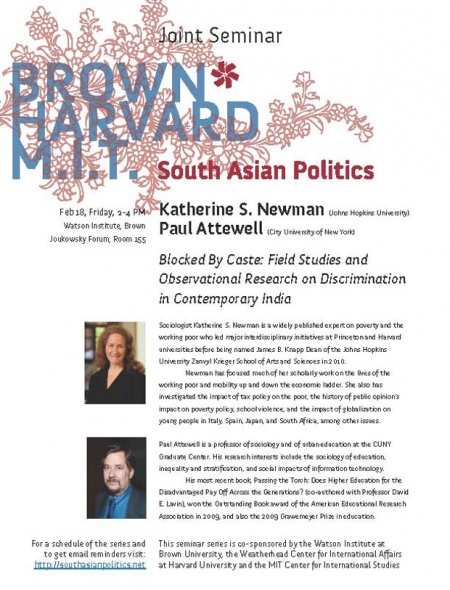 Sociologist Katherine S. Newman is a widely published expert on poverty and the working poor who led major interdisciplinary initiatives at Princeton and Harvard universities before being named James B. Knapp Dean of the Johns Hopkins University Zanvyl Krieger School of Arts and Sciences in 2010.

Newman was previously the Malcolm Stevenson Forbes ‘41 Professor in the Woodrow Wilson School of Public and International Affairs and the Department of Sociology at Princeton University, where she had taught since 2004. From 2007 to 2010, she directed Princeton’s university-wide Institute for International and Regional Studies. She founded and chaired Princeton’s joint doctoral program in social policy, sociology, politics, and psychology.

Previously, at Harvard University, she was the first dean of social science at the Radcliffe Institute for Advanced Study. While there, she designed a university-wide research program in the social sciences, promoting collaboration among faculty from the arts and sciences, public health, medicine, law and education. She also has served on the faculties of Columbia University and the University of California, Berkeley.

Newman, who has written 10 books and five edited volumes thus far, has focused much of her scholarly work on the lives of the working poor and mobility up and down the economic ladder. She also has investigated the impact of tax policy on the poor, the history of public opinion’s impact on poverty policy, school violence, and the impact of globalization on young people in Italy, Spain, Japan, and South Africa, among other issues.

Paul Attewell is a professor of sociology and of urban education at the CUNY Graduate Center. His research interests include the sociology of education, inequality and stratification, and social impacts of information technology.

His most recent book, Passing the Torch: Does Higher Education for the Disadvantaged Pay Off Across the Generations? (co-authored with Professor David E. Lavin), won the Outstanding Book award of the American Educational Research Association in 2009, and also the 2009 Grawemeyer Prize in education.

Professor Attewell has also published research on the policy of requiring more advanced coursework from high school students, and on whether remedial education works for college students. His current research projects include a qualitative evaluation of inner city public school students who are being paid monetary incentives to do well on standardized tests, and a separate project that looks at college graduation, stopping out, and dropping out among working and commuter undergraduates. He has received grants to support his research from the National Science Foundation, The Andrew Mellon Foundation, the Ford Foundation and the Spencer Foundation.