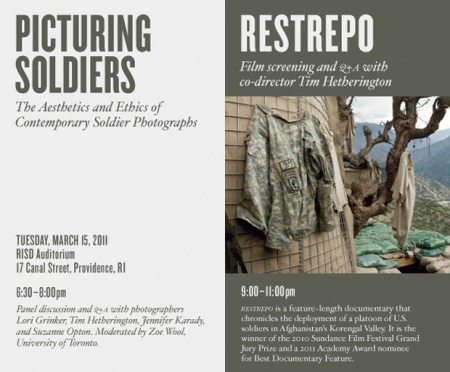 What does it mean to picture a soldier? A figure whose contours are shaped by histories of war and narratives of nationalism? Grinker, Hetherington, Karady, and Opton respond to such questions with tender portraits, graphic compositions, and candid glimpses of soldiers’ lives, dreams, and nightmares, evoking the complexities of soldiers’ lives in war and after. Picturing Soldiers spans questions of medium and message, troubling the familiar icons of conquering hero and traumatized veteran and getting at the “ethics of seeing” that photographs of soldiers entail in contemporary America.

Restrepo is a feature-length documentary that chronicles the deployment of a platoon of U.S. soldiers in Afghanistan's Korengal Valley. It is the winner of the 2010 Sundance Film Festival Grand Jury Prize and a 2011 Academy Award nominee for Best Documentary Feature.

For information about tickets and/or the event, contact Lindsay_Richardson@brown.edu .