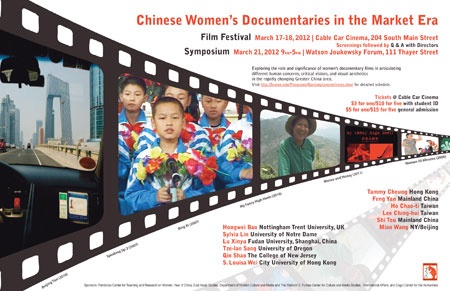 Chinese Women’s Documentaries in the Market Era will screen and examine important documentary films by Chinese Women directors from Hong Kong, Taiwan, and Mainland China. The symposium will feature directors and international scholars who will discuss the role and significance of women’s documentary films in articulating different human concerns, critical visions, and visual aesthetics in the rapidly changing Greater China area. Directors confirmed to attend include:

These Chinese women directors have made some of the most important and influential documentaries of the past decade on issues relating to the female self, sexuality, social migrations and transformations, and history. The symposium will explore these and other issues. Scholars to present include:

Films to be screened include:

A full schedule for the film screenings will be made available soon.