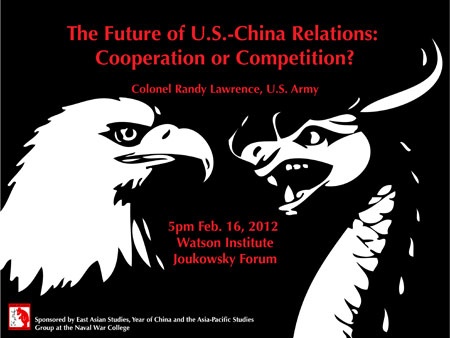 As the Obama Administration continues its “pivot” to the Asia-Pacific region, one of the most important bilateral relationships for the future will be U.S.-China relations. Washington and Beijing have close economic ties and share many common interests. Yet, there are also important points of friction in the relationship. Colonel Randy Lawrence has spent years working in China in a number of roles and has a unique vantage point on U.S.-China relations. Colonel Lawrence will provide his personal perspective on the future direction of this important relationship.

Currently a student at the U.S. Naval War College, from 2008 to 2011 Colonel Randy Lawrence served as the Executive Officer to the U.S. Defense Attaché in China. Other previous positions include three years as Army Attaché in Hong Kong and Country Director for China at the Pentagon. Colonel Lawrence is fluent in Mandarin Chinese and will be headed to Taiwan for his next assignment upon completing his year in Newport.

Cosponsored by the Department of East Asian Studies and the Year of China at Brown University, and the Asia-Pacific Studies Group at the Naval War College.