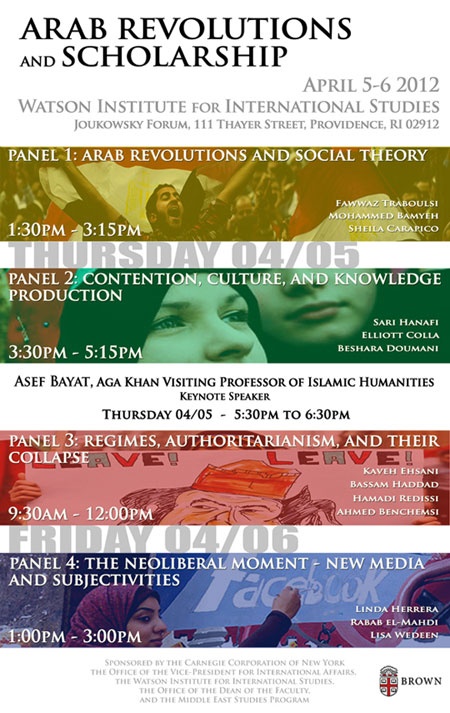 For more information and a complete schedule, please click here.

The Arab revolutions of 2011 have taken most stakeholders by surprise—Western governments, the regional regimes, activists, and observers. More than any other party, it is perhaps the scholarly community that seems to have betrayed expectations. To what extent have the prevailing analytical tools and approaches that inform the study of the Middle East contributed to scholarly oversight about the Arab revolts? How can these revolutions inform and reshape the conceptual premises and outlooks of Middle East scholarship?

The Arab Revolutions and Scholarship conference will be held at Brown University on April 5-6, 2012, led by Asef Bayat, Brown’s inaugural Aga Khan Visiting Professor in Islamic Humanities. The conference intends to bring together critical scholars to delve into and discuss the relationships between the Arab political upheavals and how we have been studying the Middle East. Rather than a mere critique of “Orientalism”, the conference aims to address what the Arab Spring means for the study of the Middle East. Do the Arab revolutions confirm current perspectives, or is there a need to reevaluate our assumptions about the way we produce knowledge about the region? For instance, what do these revolutions mean for the assumptions underlying the “elitist” approach, “authoritarian durability”, Middle Eastern exceptionalism, the political implications of the idea of rentier state, modernization perspectives, or premises about “Islamic culture?” At the same time, the conference will explore how the Arab Revolutions may offer scholars possibilities to develop fresh analytical categories and novel perspectives in order to better understand the socioeconomic, political, and cultural realities of the region.

Revolutions involve a highly complex and interconnected set of ideas, agents, and processes operating in particular political cultures and historical moments. The Arab revolutions are taking place in the current neoliberal moment in the globalization process when economic and social life has undergone deep transformations. In what ways do the Arab revolutions with their multiple visions, actors (including the subaltern, women, youth, the urban, and rural), and adversaries teach us to assess them in novel fashions? In light of these uprisings, do we need to reevaluate our understandings of class and gender dynamics, social movement mobilization, the agency of the ordinary people, and the place of Islam in politics and society?

Participants from diverse disciplines (Politics, History, Sociology, Anthropology, Political Economy, and Cultural Studies) will draw on their own thematic and disciplinary expertise but take the problématique of the relationship between these political upheavals and social theory as the core of their contributions.