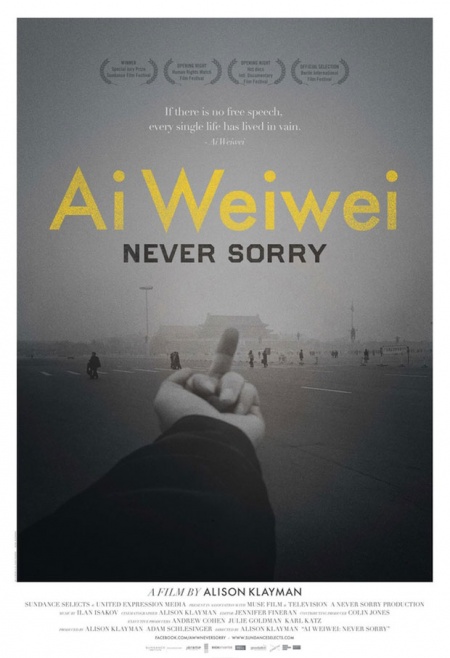 Presented by Ivy Film Festival, VISIONS, REACT TO FILM, and the Watson Institute.

Admittance is on a first-come, first-serve basis.

Winner of the Special Jury Prize at this year's Sundance Film Festival, AI WEIWEI: NEVER SORRY is the inside story of a dissident for the digital age who inspires global audiences and blurs the boundaries of art and politics. First-time director Alison Klayman gained unprecedented access to Ai while working as a journalist in China. Her detailed portrait provides a nuanced exploration of contemporary China and one of its most compelling public figures.

Q&A with the director, Alison Klayman '06, will follow the screening. Moderated by Professor James Der Derian.

Alison Klayman is a filmmaker who directed, filmed, produced and co-edited her debut feature documentary, AI WEIWEI: NEVER SORRY, which premiered at the 2012 Sundance Film Festival and won a Special Jury Prize for "Spirit of Defiance." Klayman lived in China from 2006 to 2010, working as a freelance journalist. Her stories have appeared on NPR, PBS Frontline and the New York Times online. She was named one of Filmmaker Magazine's "25 New Faces of Independent Film" and one of ArtInfo's "30 under 30" most influential young figures. She speaks Mandarin and Hebrew, and graduated from Brown University in 2006.

James Der Derian is a Professor (Research) of International Studies at Brown University and a filmmaker. He has been a visiting scholar at Oxford, Harvard, MIT, Copenhagen, PRIO, the Institute for Advanced Study at Princeton, and the American Academy in Berlin. He has produced three documentaries with Udris Films, VY2K, After 9/11, and Human Terrain, which won the Audience Award at the 2009 Festival dei Popoli. Project Z: The Final Global Event, his most recent documentary (produced with Phil Gara), will premiere at the Leipzig DOK film festival in November 2012.