Film Screening -- The House I Live In 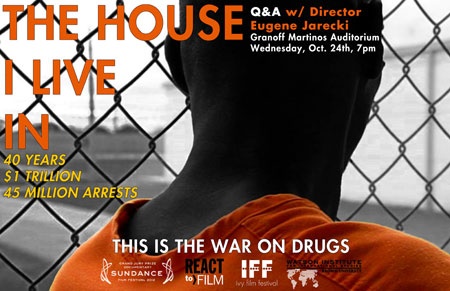 Presented by Ivy Film Festival, REACT TO FILM, Watson Institute, and Students for Sensible Drug Policy
Screening: The House I Live In, Q&A with the Director, Eugene Jarecki
Doors open at 6:45pm, screening starts at 7:00pm
Martinos Auditorium, Perry and Marty Granoff Center for the Creative Arts, 154 Angell Street
WINNER OF THE SUNDANCE 2012 JURY PRIZE
Watch the trailer: http://www.youtube.com/watch?v=a0atL1HSwi8
“Filmed in more than twenty states, THE HOUSE I LIVE IN captures heart-wrenching stories from individuals at all levels of America’s War on Drugs. From the dealer to the grieving mother, the narcotics officer to the senator, the inmate to the federal judge, the film offers a penetrating look inside America’s longest war—a definitive portrait revealing its profound human rights implications.

The film recognizes the seriousness of drug abuse as a matter of public health, and investigates the tragic errors and shortcomings that have meant this symptom is most often treated as a cause for law enforcement, creating a vast machine that largely feeds on America’s poor, and especially on minority communities. Beyond simple misguided policy, the film examines how political and economic corruption have fueled the war for 40 years, despite persistent evidence of its moral, economic, and practical failures.” – THE HOUSE I LIVE IN official press release

Eugene Jarecki is an award-winning filmmaker, public thinker, producer and author whose films such as "Reagan", "Freakonomics", "Move Your Money" have received widespread critical acclaim. Jarecki’s "Why We Fight" won the Grand Jury Prize at the 2005 Sundance Film Festival and a Peabody Award. His film "The Trials of Henry Kissinger" won the 2002 Amnesty International Award and was nominated for an Independent Spirit Award. In addition to his work in film, Jarecki is also a thinker on international affairs and has appeared on many news and radio shows, as well as been featured in multiple renowned publications.

James Der Derian is a Professor (Research) of International Studies at Brown University and a filmmaker. He has been a visiting scholar at Oxford, Harvard, MIT, Copenhagen, PRIO, the Institute for Advanced Study at Princeton, and the American Academy in Berlin. He has produced three documentaries with Udris Films, VY2K, After 9/11, and Human Terrain, which won the Audience Award at the 2009 Festival dei Popoli. Project Z: The Final Global Event, his most recent documentary (produced with Phil Gara), will premiere at the Leipzig DOK film festival in November 2012.