Inderjeet Parmar -- Following the Money: Foundations of the American Century: The Ford, Carnegie and Rockefeller Foundations in the Rise of American Power 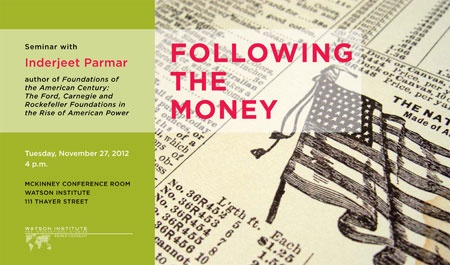 "Following the Money: Foundations of the American Century: The Ford, Carnegie and Rockefeller Foundations in the Rise of American Power"

A presentation/discussion by Inderjeet Parmar, Professor, City University of London, and author of this major work on philanthropy and its understudied role in American domestic politics and foreign policy.

About Foundations of the American Century: The Ford, Carnegie and Rockefeller Foundations in the Rise of American Power:

Inderjeet Parmar reveals the complex interrelations, shared mindsets, and collaborative efforts of influential public and private organizations in the building of American hegemony. Focusing on the involvement of the Ford, Rockefeller, and Carnegie foundations in U.S. foreign affairs, Parmar traces the transformation of America from an “isolationist” nation into the world’s only superpower, all in the name of benevolent stewardship.

Parmar begins in the 1920s with the establishment of these foundations and their system of top-down, elitist, scientific giving, which focused more on managing social, political, and economic change than on solving modern society’s structural problems. Consulting rare documents and other archival materials, he recounts how the American intellectuals, academics, and policy makers affiliated with these organizations institutionalized such elitism, which then bled into the machinery of U.S. foreign policy and became regarded as the essence of modernity.

America hoped to replace Britain in the role of global hegemon and created the necessary political, ideological, military, and institutional capacity to do so, yet far from being objective, the Ford, Rockefeller, and Carnegie foundations often advanced U.S. interests at the expense of other nations. Incorporating case studies of American philanthropy in Nigeria, Chile, and Indonesia, Parmar boldly exposes the knowledge networks underwriting American dominance in the twentieth century.