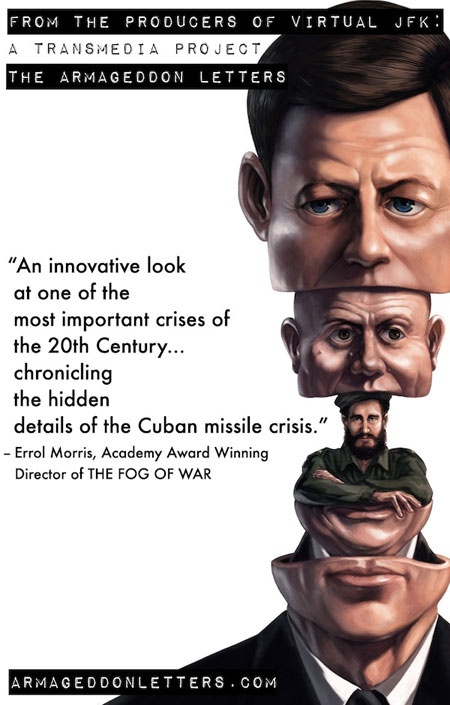 "The Armageddon Letters," with Jim Blight & janet Lang – a transmedia project (multiplatform storytelling) launched on the occasion of the 50th anniversary of the Cuban missile crisis – takes visitors behind the scenes during the October 1962 Cuban missile crisis, the most dangerous crisis in recorded history. The project is based at the Balsillie School of International Affairs and is led by the scholars and filmmakers that were involved in the Academy Award-winning documentary, THE FOG OF WAR, and the Golden Palm Award-winning, VIRTUAL JFK.

The Armageddon Letters refers to the unprecedented exchange of letters and other communications between Kennedy, Khrushchev and Castro, before, during and after the crisis.

Watch the latest short film from the project: BE KHRUSHCHEV

What people are saying about the book:
“For over a quarter century Jim Blight and janet Lang have earned the gratitude of scholars and the interested public by highlighting and preserving the human dimension of the Cuban missile crisis, the most dangerous moment of the twentieth century. With The Armageddon Letters, they are now brilliantly connecting the IPad generation to Kennedy, Khrushchev and Castro and to the lessons of that near nuclear catastrophe.”

-- Timothy Naftali, coauthor of "One Hell of a Gamble":  Khrushchev, Castro & Kennedy, 1958-1964,“Manga meets the Missile Crisis in this compelling book. Through a creative mixture of illustrations, imagined conversations, historical analysis, and the actual letters written by Kennedy, Khrushchev, and Castro, Jim Blight and janet Lang enable readers to intellectually understand and emotionally feel what happened in the dark days of October 1962.”

-- Scott D. Sagan, The Caroline S. G. Munro professor of political science, senior fellow at the Center for International Security and Cooperation and the Freeman Spogli Institute, Stanford University, and co-author (with Kenneth Waltz) of The Spread of Nuclear Weapons: A Debate Renewed.