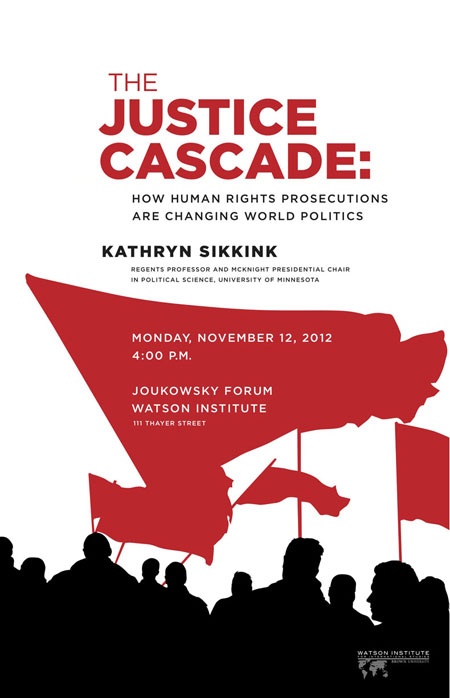 This lecture will both provide an overview of the main conclusions of Sikkink's 2011 book, The Justice Cascade: How Human Rights Prosecutions are Changing World Politics, and update those conclusions with new research conducted since the book was completed. The Justice Cascade examines the important and controversial new trend of holding political leaders criminally accountable for human rights violations. In just three decades, state leaders have gone from being immune to any accountability for their human rights violations to becoming the subjects of highly publicized trials in Latin America, Europe, and Africa. New research suggests that such trials continue to expand and often result in convictions, including some of high level state officials. In this lecture Sikkink will explore the reasons for the emergence of the Justice Cascade and its effects on human rights practices around the world. She argues that the trend is affecting the behavior of political leaders worldwide, and has the potential to change the face of global politics by helping deter human rights violations in the future.

Kathryn Sikkink is a Regents Professor and the McKnight Presidential Chair in Political Science at the University of Minnesota. She holds a Ph.D. from Columbia University. Her publications include The Justice Cascade: How Human Rights Prosecutions are Changing World Politics (awarded the Robert F. Kennedy Center Book Award, and the WOLA/Duke University Award); Mixed Signals: U.S. Human Rights Policy and Latin America; Activists Beyond Borders: Advocacy Networks in International Politics (co-authored with Margaret Keck and awarded the Grawemeyer Award for Ideas for Improving World Order, and the ISA Chadwick Alger Award for Best Book in the area of International Organizations); and The Power of Human Rights: International Norms and Domestic Change (co-edited with Thomas Risse and Stephen Ropp). Sikkink has been a Fulbright Scholar in Argentina and a Guggenheim fellow. She is a fellow of the American Association for Arts and Sciences and the Council of Foreign Relations, and a member of the editorial board of the International Studies Quarterly, International Organization, and the American Political Science Review.