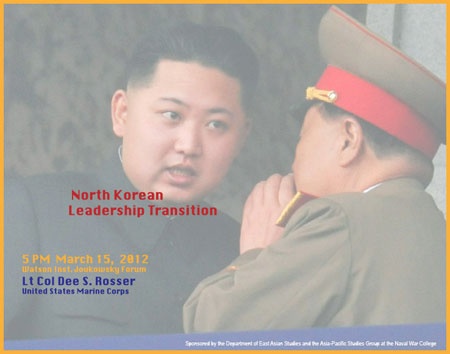 Korea watchers and the media have been paying close attention to the dynastic transition of power underway in North Korea since the death of Kim Jong Il. Most of the discussion points to concern or speculation about the son, Kim Jong Un's ability to consolidate power and assert himself as the new leader. This presentation will review the most commonly held views on the transition and offer a possible alternative.

LtCol Dee S. Rosser is a Marine infantry officer and an East Asia Foreign Area Officer who has been studying, living and operating in the Asia Pacific region since 1999. His various assignments since 1999 include serving at the U.S. Embassy in Seoul from 2004-2005 and as the Operations Officer for the United Nations Command Military Armistice Commission from 2005-2007. During this time he spent more than two months working in North Korea as the Department of Defense Liaison and Recovery Team Leader for the Joint Remains Recovery Operations. He holds a Masters in East Asian Security Affairs from the Naval Post Graduate School in Monterey, CA, a Masters in National Security and Strategic Studies from the Naval War College, attended Seoul National University and is fluent in Korean. Currently, LtCol Rosser is on the faculty of the Naval War College.

Sponsored by the Department of East Asian Studies and the Asia-Pacific Studies Group at the Naval War College.